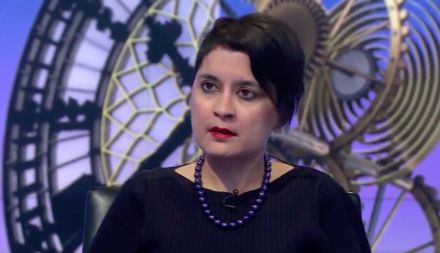 Today Baroness Shami Chakrabarti, Shadow Attorney General, said she believed Ken Livingstone should no longer be in the Labour Party.

Speaking to Sarah Smith on Sunday Politics, Shadow Attorney General Baroness Chakrabarti said: “I find it very difficult to see how any rational decision maker could allow Mr Livingstone to stay in our party.

Chakrabarti also said she was “incredibly disappointed” that the recommendations of her inquiry into antisemitism in the Labour Party had not been fully implemented.

She said: “I think the reasons for that lack of implementation are partly, looking back, that factionalism at times got in the way on both sides of that debate.

“I’m really delighted to say that [new general secretary] Jennie Formby has taken probably more action to implement my report in the last month than has happened in two years.”

Chakrabarti is the third member of the shadow cabinet to call for the former London mayor’s expulsion after Emily Thornberry and Nia Griffith.

Baroness Chakrabarti says Ken Livingstone’s comments have brought “shame on the Labour party” and left it in “disrepute”. #bbcsp pic.twitter.com/isRXMLVkK4