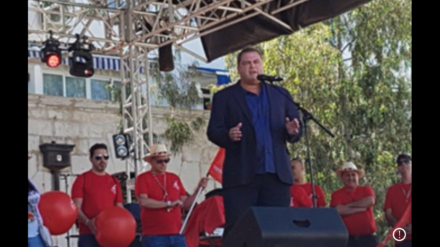 As leader of a transport union with thousands of our members working on the London Underground (LU) and in Transport for London (TfL) I know not to trust a word Boris says. He was elected Mayor of London on a pledge to keep all booking offices on the underground open. By the time he left, not one remained.

Just like me, Londoners know that what he says, and what he does, are two very different things. And let me tell you, there is nothing “of the people” about this man. In his eight years as mayor he never met with any union representatives of the workforce which keeps our capital city moving. Not once. Whilst pontificating about so called greedy tube workers, he pushed through a programme of cuts and job losses which devastated safety standards and demoralised the workforce. He destroyed any faith between the office of London mayor and our LU and TfL workers.

Yet the man who now implores us, from the comfort of his well remunerated Daily Telegraph, column-writing, chair, to Brexit with bravado, failed to hear a single of our members concerns. Our pleas simply fell on deaf ears. Not content with having caused havoc with tube safety, as Foreign Secretary, Boris, is now at it again with the country’s future.

Boris’s big problem is that he prefers his ego to evidence. Only a fool could now be entertained by him. Though the idea that he wants to save our NHS is, frankly, laughable. And for the current reprisal of his referendum pantomime act, still wrongly claiming £350m a week goes to Europe, he should be booed off the political stage as no-one believes him when he says even some of this money could still be redirected to the NHS. It’ just another of another of Boris’s many lies. Just as our union warned against Boris cuts on the Tube, so too we are now sounding the alarm against any notion of a Boris Brexit, as his ambition again gets the better of him.

Boris may expressing what many Tory Brexiteers think but dare not say but, he’s no threat to May – her foolishness has already damaged her career beyond repair. Since, Jeremy Corbyn’s blistering general election campaign, she has been living on borrowed time, with no authority left. Our zombie prime minister is finished, all Tory MPs know this and are increasingly worried about what comes next. Boris’s Telegraph words are the opening salvo of the bitterness and division that is sure to soon follow. Old wounds are being reopened. The latest skirmishes among Tory ranks are simply a new front in their three decade long civil war over the European Union. When May finally steps down, the mother of all battles will follow. I’d take great delight in seeing the Tories fight like rats in a sack if our country’s future – and therefore that of working people – was not now being played for Boris’s self-interests. That’s why Labour must now come to Britain’s rescue.

Our party’s position that jobs and workers’ rights come first in any deal with the EU, is as sensible as it is welcomed. If Boris’s vision for our country triumphs the reality will be a Britain even more divided and in which wealth inequality will skyrocket. Toff Brexiteers and their billionaire media owners will be fine, they always are. Meanwhile, the rest of us are already feeling the pinch as real wages fall, inflation spikes and investment dries up. Key parts of our manufacturing industries are being served notice by Brexit. Car plants and aerospace factories are under the cosh as multinational companies ponder whether to continue to build things here. There are hundreds of thousands of well paid unionised jobs within these sectors. Boris doesn’t give a fig but Labour does care. Tory Brexiteers’ plan for our country’s future, an offshore tax haven, is designed for the rich: not factory workers, not nurses, not teachers nor our members. That’s why it must be opposed by Labour at every turn.

There is a growing consensus within our Labour and trade union family that frictionless access to the single market is a must. We stand up for factory workers rather than making it easier for the elite to dodge even more of their responsibilities and taxes. Our union’s position on our future relationship with the EU is crystal clear. Like Labour we put jobs and workers rights first. Given the choice between having chlorinated chickens in our shops, trade deals which resemble the Transatlantic Trade and Investment Partnership on steroids or which opens the jewel in our crown, our NHS, to being taken over by privateers – we opt to stay put. We think millions upon millions of British voters – the majority – now agree with us because many referendum Leavers are horrified as the truth about Brexit emerges. Allowing voters the opportunity to change their mind is fundamental to democracy and we hope Labour now finds the courage to keep all options on the table – including staying put if that’s the best Brexit deal on offer.

Labour must also nail all those who wish to divide us by the accident of our birthplace. This is the job of bosses and the Tories not ours. Migrants don’t cause low wages nor – whatever Boris wants to tell you – do they drain our NHS of money. A deregulated labour market, unscrupulous greedy bosses and Tory policies directed from Westminster do that. That’s why our union stands shoulder-to-shoulder with the victims against the aggressor, our ruling class. Thankfully, Labour’s 2017 manifesto for the many is the antidote to decades of neoliberal policies which have left far too many of our people behind, and our NHS woefully run-down by the Tories. Our party will once again use the power of the state to restore dignity to all of our people rather than blame migrants for their ills whilst letting the rich and powerful of the hook. Our union is not in the business of arguing for limiting the rights of our people.

Many TSSA, LU and TfL members wish there was a mechanism by which they could impeach Boris for the havoc he created with the safety of our Tube. Our members know Boris and the awful Tories can’t be trusted with Brexit any more than they can with passenger safety nor our NHS. That’s why I’m proud our union is hosting a rally, jointly with LabourList, at Labour Party conference in Brighton this coming Sunday demanding “An end to workers exploitation not free movement”. Free movement is a first step towards a world without borders. Boris and his ilk only believe in free movement for capital and its rich elites. TSSA has no truck with curtailing free movement of workers. This will just simply set the clock ticking on Tory time which will run backwards on workers rights and further delay Marx’s vision of a world where workers of all lands unite!

Over the coming days we will be announcing our great line-up of guest speakers. But we need you our Labour Party members, to join us in the Albert Room of the Grand Hotel in Brighton at 9pm on Sunday to show the strength of our labour movement’s demand for Labour to save Britain from this Tory Brexit disaster-in-the-making.