I was really disappointed today to read a quote from Shadow Justice Minister Sadiq Khan, in which he attacked the government for giving prisoners the vote – not least because this is a decision imposed by the European Court of Human Rights. Such pointless posturing does no-one any good.

I’m a firm believer that the primary aim of prison should be rehabilitation of those who have broken the laws of society, to stop them from re-offending when they are released. Of course it’s also about protecting the public from dangerous people and there should be an element of punishment – more so for some serious crimes than others – but if the number-one goal of prison is not to stop people from committing crimes again as soon as they get out, what on earth is the point?

Whether or not our current prison system actually rehabilitates offenders should probably be the subject of another article. However, there is nothing rehabilitative about denying prisoners the right to vote.

Cutting prisoners off from society and denying them a say will make reintegration back into society upon their release that much more difficult. Kate Green MP put it far more eloquently than I in an article she wrote for Progress back in November:

“The more detached prisoners are from society while in jail, the more difficult that reintegration will be. The less they feel they have a stake in society, the more alienated they’ll feel. And the more disengaged they feel, the less willing or able they’ll be to reintegrate.”

I stated my position on this subject earlier today on Facebook and Twitter and probably had more responses than on any other issue I’ve ever spoken about. It’s clearly something that evokes strong reactions amongst party activists. I was heartened to see that a majority of the comments were positive, but those which were not made a number of arguments I want to counter in this article.

The second and by far the most commonly used argument against prisoner voting rights was that we shouldn’t be giving murderers the vote. No, I don’t think we should. That is why the coalition proposal denies anyone serving longer than four years in prison the vote, and gives judges the discretion over denying the vote to those serving less than four years. I think it is right to leave that discretion to our judges and not politicians.

The third reason was that victims of crime would not be happy with prisoners having the vote. Let’s ask them. I’ve been a victim of crime. I’d be happy knowing that the person who committed that crime received a proportionate sentence, entered a rehabilitative programme and left prison never to commit another crime again. Whether they get to vote or not probably wouldn’t enter my mind.

I had an e-mail from a friend who works as a Probation Officer earlier. He can’t say anything publicly because of his job, but he told me about a project he worked on in which ex-offenders visited parliament to meet with key politicians and policy makers to put forward their ideas about tackling crime and making communities safer. He also told me about a very effective voter registration scheme he conducted with young ex-offenders keen to engage in civic society and make a positive contribution. He left me with a very good line I wanted to use: “Promoting citizenship helps offender rehabilitation.” Simples.

We seem to be moving ever closer to a Daily Mail view of the world, in which all criminals should be locked up for life, or worse. This attitude does more harm than good and though it might make us feel better in the short term, and feel that ‘justice’ has been done, it will only make the situation worse in the long term.

Update: A previous version of this article said that “the judgement handed down by the European Court of Human Rights denies anyone serving longer than four years in prison the vote, and gives judges the discretion over denying the vote to those serving less than four years.” However this is not the case, this the coalition proposal rather that the view of the court.

The article has been amended to reflect this. 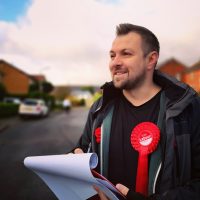