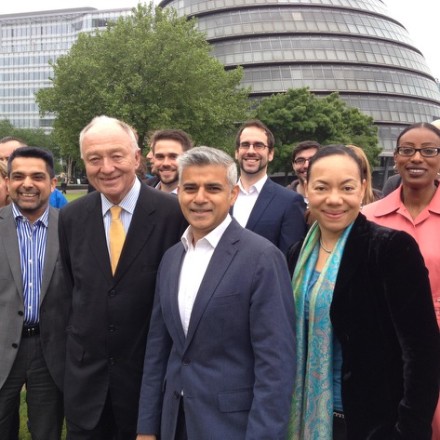 Sadiq Khan’s campaign to become Labour candidate for London Mayor received a boost today with the backing of both Ken Livingstone and Oona King – who in 2010 fought it out for the Labour nomination for the 2012 Mayor election. Today, the two have posed together to endorse the Tooting MP in this year’s selection.

Livingstone, who served as London Mayor for two terms between 2000-2008, said that Khan represented the journey of many Londoners:

“It’s time to hand over to the next generation. Sadiq grew up on a Council Estate but ended up running a successful business and sitting in the Cabinet. His story is London’s story. He will ensure that all Londoners have the opportunities they need to make a better life for themselves.”

King represented the East London constituency of Bethnal Green and Bow for eight years, and said that the fact Khan could count on support of the likes of her and Livingstone showed he has the ability to build a broad coalition of support:

“We need a candidate who can unite Londoners from all backgrounds and win the Mayoralty. Sadiq has proven he knows how to win London and he can bring together people as different as me and Ken. Sadiq is the candidate most likely to win the Mayoralty for Labour.”

Khan only announced his candidacy last week after stepping down from the Shadow Cabinet, said he was “delighted to receive support from both Ken and Oona”.