What the papers say

The Telegraph’s Ben Riley-Smith appear to be the only commentator today willing to declare a winner of last night’s leadership debate on Newsnight. He says “Far-Left MP Jeremy Corbyn has emerged the clear winner in Labour’s first major leadership hustings”, noting that “the veteran socialist won repeated cheers from the audience as he called for an anti-austerity economic policy”. The other candidates, by contrast, “struggled to connect”.

His colleague Rosa Prince is more equivocal – she says “none of them felt like they possessed a universal appeal.” She adds: “none of the candidates messed up royally, but nor did anyone really dazzle either.”

The Mirror’s Kevin Maguire came to a similar conclusion, saying that he received a spam message during the debate from Harriet Harman asking him to sign up as a supporter, but ignored it. “I suspect tens of thousands, perhaps hundreds of thousands, of others would’ve received and deleted it immediately”, he writes. “She’s wasting her time unless Labour raises the debate.”

The Guardian’s line rings this same bell. They said there was no clear winner, saying a  “sceptical audience also expressed frustration at the lack of specifics from the four-strong panel.”

A characteristically blunter observation can be found in The Sun’s editorial this morning. They give a not exactly ringing endorsement of Liz Kendall – she’s unlikely to be changing her campaign slogan from “fresh start” to “only prayer” anytime soon: 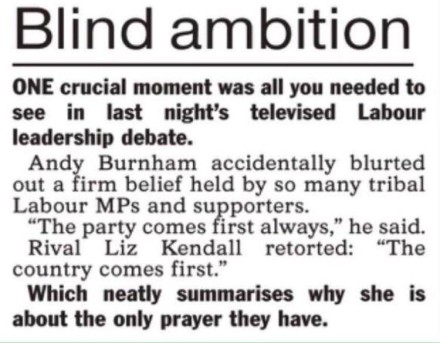 Kendall is the main focus of The Independent’s coverage too, they concentrate on her “fresh start” pitch: “Liz Kendall appealed to Labour members to elect her as leader to give the party a ‘fresh start’ as she declared that her main rivals Yvette Cooper and Andy Burnham had ‘baggage’ from serving as Cabinet ministers.” Columnist John Rentoul blogged that Kendall “has the right instincts” but overall the event “was the sort of thing that gives pedestrians a bad name”.

Finally, The Times sees the main moment as when three of the candidates supported the idea that it should be easier for Labour to remove leaders: “Speaking at the first televised hustings in the Labour leadership race, Liz Kendall, Andy Burnham and Jeremy Corbyn backed the idea of a simpler mechanism to remove the leader.”

What the campaign teams say

Which moment do the candidate’s teams think was the biggest? The official campaign Twitter accounts are now one of the easiest way of finding out what their main messaging from these events is.

Yvette For Labour highlights her belief that the party’s focus should be on “holding the Tories to account”.

YC – "Our focus has got to be holding the Tories to account" #YvetteForLabour #LeadersDebate pic.twitter.com/BHO8eA5EUp

Andy For Leader goes on “secure jobs and more homes”.

Liz For Leader pick up on Kendall’s “the country comes first” quip at Andy Burnham.

To change our country, we need to change our party to win in 2020. And it starts here:http://t.co/peEn3PWqwf pic.twitter.com/NBfAtAMnoE

And Corbyn For Leader emphasised Corbyn’s call to bring democracy back to the Labour Party.

Last night’s hustings was just the first of a series of broadcast debates scheduled for the campaign. Yesterday, Labour confirmed the chairs for five other high-profile aired hustings:

They also revealed which journalists would be chairing the party’s regional hustings, being held in target seats that Labour failed to gain in May. They are: