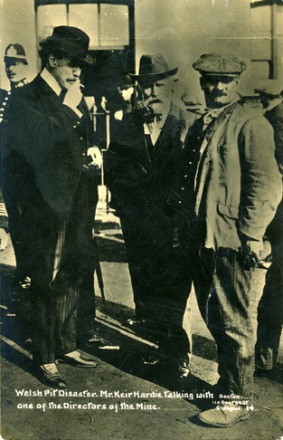 Hardie’s attitude to socialism is inconsistent over the years in his writings. This is hardly surprising as he, and others in this period, were making up the philosophy of the Labour party as they went along. They had to stitch together a sometimes uneasy alliance between middle class intellectual socialists and the working class representatives of organised Labour. What is consistent is his focus on the unfair distribution of rewards under unregulated capitalism, a faith in the brotherhood of humankind over selfishness, and a resistance to philosophical orthodoxies which would make socialism less appealing to the masses.

Hardie was clearly interested in Marxism but rejects it in favour of a humane and popular approach to socialism that comes out of his Christianity and other influences. His friend Bruce Glasier once wrote to Hardie of how their “Burns point of view” was superior to a socialism of “German formulas”, referring to the ideas of humanity and equality found in the works of Robert Burns. Below are extracts from another Labour Leader article where Hardie sets out the Labour criticism of more dogmatic forms of socialism.

From The Labour Leader, September, 1903

I claim for the Independent Labour Party that its socialism is above suspicion, and its independence unchallenged and unchallengeable; and yet in the platform speeches or in the writing of its leading advocates the terms “class war” or “class conscious” are rarely if ever used. For my own part I have always maintained that to claim for the Socialist movement that it is a “class” war dependent for its success upon the “class” consciousness of one section of the community is doing Socialism an injustice, and indefinitely postponing its triumph.

It is, in fact, lowering it to the level of a mere faction fight. Socialism offers a platform broad enough for all to stand upon who accept its principles, and, fortunately, these are being freely accepted by ,many leaders of thought and opinion whose “class war” and “class conscious” interests and instincts would lead them into the opposite camp. It is a quaint spectacle to see a top-hatted, frock coated member of the prosperous middle class sweating on a platform to prove his “class consciousness” with the poor worker. Do these men de-class themselves when they become socialists?

…I have endeavoured without success to discover upon what grounds this dogma has been imported into the Socialist propaganda? Is it tof the essence of the Socialist teaching, or is it the work of commentators doing for Socialism what the Schoolmen did for Christianity in the middle ages? A great principle may be so overlain by dogmatic interpretation as to be unrecognisable; nay, the dogma may in course of time come to be considered of greater importance than the principle itself. It is well, therefore, to examine with care all formula and phrases which we are told are not part and parcel of the true doctrine, but the only real interpretation thereof.

Socialism makes war on a system, not upon a class, to carry it forward we want to enlist conscious Socialists irrespective of class. Further I hold opinion strongly that the insistence upon the class war and class consciousness is an injustice to the Socialist movement.

….The class war dogma is admittedly based on the theory of Socialism set forth in the Communist Manifesto of Marx and Engels…It does not touch one human sentiment or feeling. However correct it may be as a form of words, it is lacking in feeling, and cannot now be defended as being scientifically correct. It entirely leaves the human element out of account. Evolution is not a class struggle; and even where is assumes that form it is but the outward expression of an inner fact.