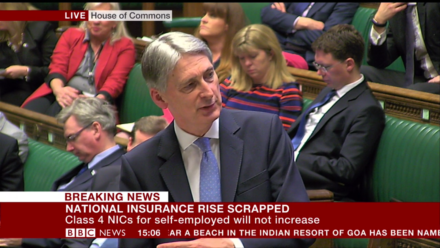 I have been arguing for long time that Labour should consider itself to be playing at home when it comes to the self-employed and freelancers. The Tories have always tried to adopt a rather feudalistic approach consider the self-employed to be their vassals. But last week’s Budget has fractured and broken any such misplaced allegiances -and Philip Hammond’s humiliating backtrack on national insurance contributions (NICs) rises indicates that they know it too.

The task now is for Labour to follow this up, not just note it down as a minor victory, but to kneel and grasp the mantle of speaking for the self-employed. It needs to start by using the planned summit on self-employment as a platform to listen and build out a whole policy agenda for the self employed. It should be a proactive and forward thinking platform to support “precariat” gig workers, white van man and professional workers.

We need to reflect on what has happened with this climbdown and what it means. Last week I awoke to hear Tory MPs articulately demolishing Philip Hammond’s Budget for its assault on the self-employed. We weren’t dreaming though – it was a nightmare for the self-employed and showed a misunderstanding of the whole sector.

It turns out that I hadn’t imagined it either when Theresa May stood on the steps of Downing Street saying that her Tory party was now the “new workers’ party”. The new, thriving and growing workforce in the UK is the self-employed, which is set to outstrip those in the public sector by 2018 and, at 4.8 million people, is already over 15 per cent of the workforce. Alas this was not a workers’ Budget.

Like a Victorian Mill owner, Hammond began his speech by extolling the fact that unemployment was down and there had been progress on the economy – and, though he didn’t acknowledge it, the self-employed have been a strong dynamo delivering this growth. As the mill owner he almost applauded their thrift, flexibility and hard work, but then delivered a fine on them for such virtues and for being too productive by putting up national insurance and reducing the dividend threshold.

It was a shock, since many of Britain’s self-employed can be described as precariat workers on wages lower than the national average. Many are working from new innovative digital platforms which are booming. Yet, using the chancellor’s own argument, if more people are working and these platforms are booming, where have profits and subsequent taxes gone? We know that they certainly haven’t gone into the pockets of the workers, instead they have gone to the offshore or tax haven accounts of which corporate business is so fond, and on which government takes only ineffectual action. Instead Hammond chose an easier target.

The self-employed, who have for so long been ignored and marginalised, are now being punished by government for having the audacity to start to organise. Whether it is the Uber driver or CitySpint couriers demanding better pay and more rights, or the Deliveroo drivers taking the bold step of withdrawing their services, or co-ops forming alliances to support the self-employed – this wasn’t in the Tory vision of a new workers’ economy.

Such audacity means that the government mantra remains one of treating these workers as employees for tax purposes, while treating them as self-employed in terms of rights, so they hardly have any. The result – we have the most ham-fisted Budget for the self employed for nearly two decades.

Hammond had to change tack because all he was proposing was a flexibility tax. A levy on both opportunity and aspiration. Increasingly the self employed carry much of the risk in the workplace – no holiday pay, sick pay, maternity support or pensions – and they would carry more of the tax as well.

On behalf of every self-employed worker who has experienced sickness, has no holiday pay and has experienced long and anxious gaps between contracts with no state support – to paraphrase Samuel L. Jackson – tell me again I am not a proper worker, I dare you…

There are real issues for the self-employed in our economy, but this Budget was not proactive to help them, simply reactive on the most basic of issues. The complaint seemed to be that money is needed to fill the coffers to pay pensions. The proposal was to rob the self employed, who have no pension, presumably to make up a short fall for those that do.

What the self-employed need from the “real world” that Hammond pretends to know all about is recognition and help. Many suffer from not having a written contract for their work and are plagued by late payments. Others work through unscrupulous agencies who take huge secret margins of over 30 per cent from their work.

It doesn’t have to be like this – a different world is possible. Labour Business is talking with MPs to draft positive policies for the self employed. We propose taking the Freelancing Isn’t Free Act from New York which guarantees written contracts and guards against late payment. We will strengthen it with the backbone of Britain’s fintech technology, provide a positive role for unions and co-ops and also propose rules to ensure that agencies have to declare the margin they take from contracts. How can it be that a financial advisor declares the margin when selling you insurance but, for your work, agencies can keep it secret?

These would be pledges we’d like the next Labour government to make. Unlike the Tories, we would keep them. Instead of marginalising, ignoring  and penalising those who work for themselves, it will instead recognise, organise and empower them.

Philip Ross is a freelance business analyst and activist in the freelancing community. He is also Labour Business’ ambassador for self-employment and freelancing.

Philip Ross is Labour Business’ ambassador on self-employment and chair of the policy group on freelancing.

View all articles by Philip Ross