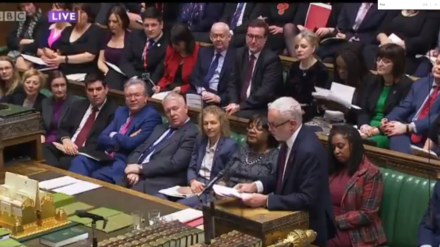 You live for days like this when you are leader of the opposition. Jeremy Corbyn was able to press home a series of core arguments on the Tories’ failure on the NHS with a level of potency thanks to the intervention of one very erratic cabinet minister days beforehand.

Boris Johnson was not in the Commons today but the Labour leader quickly highlighted the words of the “absent foreign secretary” who – with the sledgehammer subtlety for which he is known – had demanded an extra £5bn a year for the NHS from the front page of several newspapers.

Johnson is, of course, bouncing around deep in Brexit games and one eye on the Tory succession but his blunt briefing to Westminster journalists had put his own side on the back foot.

Corbyn is showing greater aptitude at exploiting the regular Tory turmoil and, like all Labour MPs, his weekly constituency surgery is probably stocked with tales of the frontline impact of under-funding of the health service.

He kicked off with a simple question, asking May if she agreed with Johnson about the need for extra cash. The PM went back to the Budget, citing what she claimed was £6bn for the NHS.

Corbyn pointed out that this was “£2.8bn spread like thin gruel over two years”.

This took him into the meat of PMQs for time immemorial – party leaders trading stats over the quality of public services. Corbyn also had a line from the UK Statistics Authority about the “fiddling” of figures over missed waiting time targets.

May sought refuge in Wales – as she often does, with a series of claims about the NHS in the Labour-run nation. And then – well, you know the rest of the story from there.

This type of exchange is one we have heard before from two opponents who are solid but whose battles lack the bravado of Ed Miliband and David Cameron.

Corbyn is right to challenge the government on the crisis in the NHS, particularly when the debate has been fuelled by the self-interested comments of Johnson, but it is still a difficult task to deliver in a fresh way the argument which has been pursued by him and Ed M for the last eight years.

The Labour leader was helped by some hair-raising stories of the human impact of NHS failures and under-funding. The figures on 14,000 NHS beds lost since 2010 were alarming enough but the stat about up to 80 patients being harmed or dying following “significant ambulance delays” over three weeks this winter were truly startling.

“This is a very serious situation… what investigation is the Department of Health carrying out into these deeply alarming reports?,” Corbyn asked.

May, a keen follower of cricket, batted these questions away but she was never able to hit her opponent out of the ground.

Indeed, the image produced by Corbyn of ambulances backed up in hospital car parks in mid-winter, the report of a man who froze to death, underlined the severity of the crisis.

Corbyn built up to a big finish. His final question remains a bit long on most occasions, and he has to contend with orchestrated Tory jeers, but the last line was sharp enough to resonate with broadcasters and print reporters long after the session.

“People are dying unnecessarily in the back of ambulances and in hospital corridors. GP numbers are down, nurses are leaving – the NHS is in crisis… When is she going to face up to the reality and take action to save the NHS from death by a thousand cuts.”

Corbyn was the winner and May lost – but is is the spectre of the NHS losing out long-term that was the abiding fear from this fiery debate.