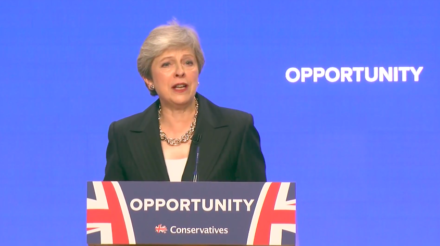 Tory conference 2018 kicked off with a huge data breach when its official app revealed the contact details of MPs and ministers:

Oh dear this is not calming matters. An irate MP responds: “Concern caused? Concern? I’m now receiving prank calls and will have to change my phone number, which I’ve had for almost 10 years. This is not a small matter. Brandon needs to give us answers. I’m more than concerned.” https://t.co/tdsF3xOtIV

As the conference proper began, Treasury minister Liz Truss gave a typically light-hearted speech that called back to her infamous dairy-based 2014 offering:

Liz Truss’s gags going down very well in the press room. Says she’s been banned from talking about cheese “and that is a disgrace”.

Failing Grayling was at it again:

One of the quick fire question was “Plane, train or automobile?” and Grayling didn’t answer train AT A RAIL EVENT WHY IS HE SO BAD AT THIS

The FT‘s Jim Pickard saw another:

as analogies go this is not encouraging: the lightbulb was finally achieved after 76 years of failed experimentation https://t.co/WiwRsgA9FL

If you’ve ever wondered what links vaping and Brexit, wonder no more:

I’m at an event where someone just claimed: “a lot of people who vape have a dislike for the EU” pic.twitter.com/zMPgk76Rjr

So Chris Grayling has just gone on a lengthy ramble about how inspiring it was when everyone pulled together to save stranded passengers after Monarch went bust, before adding: “And that, my friends, is what will happen after Brexit.”

The Culture Secretary got that feeling, you know, the one when people would rather you were a hologram:

Jeremy Wright is, disappointingly, delivering his #CPC18 speech in person, and not as originally planned, as a hologram.

As a result, literally nobody is paying attention.

as analogies go this is not encouraging: the lightbulb was finally achieved after 76 years of failed experimentation https://t.co/WiwRsgA9FL

A comedy in two acts pic.twitter.com/vPTjOcaIj7

When Tory conference should really get applause signs for its right-wing audience:

Boris Johnson tells the Tory conference: “It is a disgrace that no banker went to jail for the crash of 2008.” Leaves a massive pause. Eventually the audience of Tory activists work out they are supposed to clap.

I think I’m done here to be honest #cpc18 pic.twitter.com/1Gxy8i3A5M

Leaflets being thrust into hands of visitors to the Conservative Party Conference claim to have found an ‘electoral winning policy’: A Minister For Men. pic.twitter.com/DQ2Aufokyf

Finally, a positive vision for the Conservative Party:

James Cleverly is currently giving one of the strangest fringe speeches of all time. “This whole pizza thing is not working. We need to go back to burgers. We have the old burger people and the people who really embrace the pizzas.” Haven’t got a clue what’s going on.

I’m in Wetherspoons, it’s full of Tories and someone is yelling “WHO IS AGAINST CHEQUERS” followed by a guttural noise that sounds like a dying badger YUURRRRRR #cpc18

Today, as we waited for Theresa May to take the stage, some were disappointed James Duddridge didn’t opt for more drama in sending his no-confidence letter:

Geoffrey Cox stole the show as he introduced the PM:

Geoffrey Cox has cracked it, this is the only way a podium should be deployed pic.twitter.com/E31SJU5dJo

It inspired the masses:

Even Geoffrey himself thought so:

THIS. IS. NOT. NORMAL pic.twitter.com/nHueua3rut

After Javid recognised Diane Abbott’s work earlier in the week, May acknowledged the abuse received by the Shadow Home Secretary – who promptly points out their hypocrisy:

Some nice words from Tory leaders like Theresa May and Sajid Javid. Makes you wonder who was responsible for the Tory party’s relentless personal attacks in the general election campaign 2017 #CPC18 pic.twitter.com/w3Ar0dZLkA

Letters may not have fallen off the background wall, but a couple of pledges did:

The writing is on the wall for the Conservatives. Or at least it was…

Eight years of budget cuts and the Tories have completely abandoned any pretense of standing for security and stability.#CPC18 pic.twitter.com/DydqAlUeOv

And that concludes Tory conference 2018.