Under Jeremy Corbyn’s leadership, Labour is establishing itself as the party of climate justice. The party has been leading the way in developing credible policies that respond to our climate emergency without harming workers. Its plan for a green industrial revolution promises to create 400,000 skilled green jobs, bring energy companies into public ownership and install solar panels for low-income households and those living in social housing.

Even more exciting is how key shadow ministers like John McDonnell, Rebecca Long-Bailey and Clive Lewis have called for the membership to push for more radical climate policy from below. This challenge has been met by the membership, who are enthusiastically backing Labour for a Green New Deal’s conference motion, which commits the party to go even further on climate by adopting a comprehensive and truly transformative policy.

Since our launch in March, Labour activists have already come together to form nearly 20 Labour for a Green New Deal local groups across the country, from Cornwall to Tyne and Wear. Our support teams are talking to new people every week and are overawed by the excitement for such a radical proposal.

This week, the results of the most recent LabourList survey showed that 89% of readers want the party to adopt our conference motion proposal for a green new deal, including the commitment to a zero-carbon Britain by 2030. This is a truly staggering majority. Perhaps it shouldn’t come as too much of a surprise. Labour members know that climate change is a class issue, and that going green as soon as possible is key to providing a brighter future for workers in Britain and abroad.

A green new deal that offers decarbonisation with high-quality, well-paid, unionised jobs to all should be natural Labour policy. Labour for a Green New Deal’s vision for this to be accompanied by a democratisation of the whole economy also fits in well with the party’s other flagship proposals on alternative models of ownership.

Setting a deadline for decarbonisation, however, is more contentious. This is why the support for zero-carbon by 2030 is so significant. To put it in context, although 2030 is more lenient than Extinction Rebellion’s calls for net-zero emissions by 2025, it’s a big step up from Labour’s current policy aiming for net-zero by 2050.

We must be clear that a 2050 target – based on the conservative recommendations of the Intergovernmental Panel on Climate Change (IPCC) – constitutes a death sentence for those in the global south, who will pay the biggest price of climate breakdown despite having done the least to cause it. Although calculating dates for decarbonisation based on marginal temperature temperature rises is an abstraction from the reality of climate breakdown for people’s lives, any target to stay below two degrees warming is a death sentence for millions. 1.5 degrees must be the absolute limit of what we can allow.

To ensure the UK meets this target, we need to push ourselves onto a footing for zero-carbon by 2030. We simply cannot afford to be complacent and delay turning things around until the very last moment, which is what a 2050 target entails.

As the nation that led the way in systematically exploiting fossil fuels to drive its empire, it is Britain’s responsibility to go further in the global decarbonisation effort. As one of the world’s biggest historical polluters, we need to set the pace with a radical target. Even if there is leeway until 2040 or 2050, that should be afforded to those in the global south, rather than the UK, which has enjoyed more than its fair share of carbon already.

Getting Britain zero-carbon by 2030 is possible if we act now, but it would be dishonest to say it won’t require massive changes. This is why Labour for a Green New Deal has outlined a vision for these changes to happen on terms that improves, rather than restricts, the quality of life for the working class, through a transformation of the economy based on socialist and democratic principles.

Through the support they have shown for this proposal, Labour members have demonstrated that our party is well ahead of the game on the radical thinking demanded by the challenges of our time. They now have the power to make a transformative green new deal a reality at party conference in September, by passing our conference motion at their local Labour parties.

We need even more supporters joining local community groups and unions to push their local party, from constituency to city to national level. That is why we’re calling on everyone who wants to see climate justice to sign up to our campaign and find their local Labour for a Green New Deal group, or get in touch with us to start their own. 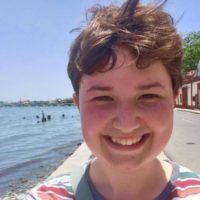 Rosie Carter-Rich is a Labour activist and local groups lead for Labour for a Green New Deal.

View all articles by Rosie Carter-Rich