The new Chancellor, Kwasi Kwarteng, will tomorrow announce an emergency Budget, supposedly to deal with the cost-of-living and energy crisis. In it, we will see the energy price cap rise to £2,500 and the cap on bankers’ bonuses possibly lifted, as well as tax cuts designed to reward the wealthiest. At the same time, we are heading into a winter where food and fuel prices will skyrocket as communities, still recovering from the disruption of the pandemic, are expected to make heart-breaking choices between heating and eating.

It’s clear that this government is content to abandon huge parts of society. As campaigners and politicians who are committed to justice and equity, it’s time to unite in opposition to their plans and provide a bold alternative.

The response to the pandemic around the world showed us that large scale, society-wide mobilisation is possible. When people rise up and force decision-makers to act, transformation can happen. But decision-makers won’t make these big changes without a fight – there are too many vested interests holding them back. That’s why Green New Deal Rising organisers have been taking to the streets to push MPs to fight for a comprehensive plan that can address inequality, the climate emergency and the cost of living crisis – the green new deal.

Last year, we worked together to launch the green new deal bill. This bill would create legally binding targets to cut emissions and reduce inequality, as well as changing the way the government manages the economy to enable huge investment in jobs, green infrastructure, public services, and environmental protection. It would also put in place a comprehensive action plan to transform our energy supply, transport system, farming sector, buildings and the way we work so we can decarbonise quickly. This is our generation’s moon-shot.

And we’re far from alone in wanting strong action on the climate crisis. In recent polls, 80% of the UK population reported being concerned about the climate emergency and 67% wanted our country to be a world leader on climate change.

So, as Labour builds its campaign for the next election, we want to see the party boldly making the case to the public that a plan like the green new deal is a vision we can all get behind. Whether it’s better public transport, workers rights, pay rises, investment in green jobs, or a transformation of public services, the green new deal provides a vote-winning package to support working people and communities and get us out of this crisis.

The Labour leadership’s commitments to retrofitting and a mass roll out of insulation to the UK’s leaky homes have been positive. Their calls for an energy price freeze and a windfall tax are also steps in the right direction. And the £28bn a year they have pledged to combat climate change is a good start, but this conference we need to see how that money will be spent. We need transformative policy commitments.

Announcements should include a historic roll out of renewables with a focus on onshore and offshore wind and tidal power so that we can decarbonise fast, as well as a ‘Just Transition Fund’ that will prioritise good green jobs for anybody who wants one. Capital expenditure projects like a National Nature Service could restore our natural world and help build a greener economy, while ground-breaking investment in our much needed public services like transport, the NHS, education and social care should be high on Labour’s list. We should be learning from countries like Germany in our pursuit of zero-carbon transport and bringing our bus system into public hands as well as our trains.

Along with public ownership of transport, Labour must commit to public ownership of energy. This would enable democratically-elected governments to keep energy prices low, stop billionaire companies raking in runaway profits and make sure we move to clean energy fast, dealing with the root causes of the crises we are facing. Nationalising energy would cost 2.8bn, which is nothing compared to the £29bn bailout of energy companies being suggested.

Labour must also come up with distinct plans to get money into people’s pockets as quickly as possible by expanding welfare provision, paid for by windfall and wealth taxes. To lock-in financial support we also should repeal all anti-union laws as well as fighting for inflation-beating pay increases.

In the long-term, we must also acknowledge the role the UK has played in a crisis that hurts communities around the world and put our money where our mouth is, with at least £20bn in financial support to lower-income countries up to 2030, to both reduce emissions and adapt to the changing climate. Now is the time for Labour leadership to be on the right side of history. This Labour Party conference, we need a bold commitment to a comprehensive green new deal.

View all articles by Nadia Whittome 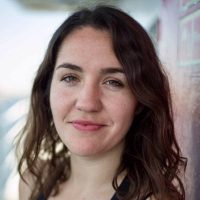 View all articles by Hannah Martin