An entire generation has been failed by three Tory Prime Ministers. Will the fourth be any better? Liz Truss was unveiled as our next Prime Minister last week on the same day many children and young people returned to school. What difference will her leadership make to young people in the UK? With the depth of the crisis engulfing this country, you would think there would be some clear policies to tackle the issues we face right now and into the future.

Young people are clearly at the heart of any future this country will have. Yet while the Tory leadership race gave some attention to education, it has been hard to find any mention of youth services beyond that, and the topic was noticeably absent from the new Prime Minister’s first Downing Street speech. 12 years of cuts and now sky-high inflation under the Tory government have stripped funding away from local authorities and ripped £1bn out of youth services.

Labour has always been and will continue to be on the side of young people. We would back the local authorities, schools and charities that do so much good in our communities.

Truss’ leadership campaign pledge to give every child “the best opportunity to succeed” wherever they are from and whatever their background felt hollow coming from someone who has held ministerial roles continuously for the last ten years. Truss and her Conservatives have been crushing opportunity, not creating it.

In her first speech as Prime Minister, she promised to turn this country into an “aspiration nation”. This is good to hear, but the era of austerity stripped away many safeguards for young people that might have mitigated the harms of Covid lockdowns. The effect of the pandemic on young people has been dramatic.

Between March and June 2020, a period when schools were closed to most pupils, symptoms of depression and post-traumatic stress disorder were found to have significantly increased in children aged between seven-and-a-half and 12 years old compared to immediately before the pandemic. Reductions in average levels of wellbeing occurred most clearly in February 2021, when schools were closed to the majority of children, before recovering towards the end of the academic year as restrictions were eased. Similar to patterns seen pre-pandemic, children and young people with special educational needs or disabilities were also more likely to have poorer mental health than their peers.

In 2020, young people aged between 16 and 24 who lived in the most deprived areas of the UK experienced increases in psychological distress 3.4 times larger than those in the least deprived areas. There is also evidence that children with a probable mental disorder were more likely to live in a household that had fallen behind with payments such as bills, rent or mortgages.

Birmingham Northfield, where I live, has some of the poorest areas of the country. One in three children in this area of the UK’s second city are living in poverty. That’s 7,700 children. With schools back, it is urgent that England follows Wales and Scotland’s lead and introduces free school meals for all. Truss has no plan to stop children from going hungry. She has no plan to offer them the same opportunities they had before Tory austerity gutted youth services.

In Birmingham Northfield, 8,805 households (19.1%) live in fuel poverty, compared with 13.42% in the UK as a whole. Unless serious action is taken to address energy bills this winter, children across the country will not only be hungry; they will also be cold.

Before coming into politics, I was chief executive of UpRising, a charity which works to improve young people’s life chances with a range of leadership development and employability programmes. We worked in Birmingham and across the UK to build young people’s confidence, access to networks and skills. We worked with education establishments and local employers, but sometimes our efforts felt like papering over the cracks left by uncaring Conservative governments. The pandemic has made those cracks wider, and young people are falling through them.

The last Labour government put education and young people at the heart of its policy framework, and we will do this again. Labour in government has pledged to set out an ambitious recovery plan to help young people catch up. We would review how education is funded, invest in additional teaching staff, introduce mental health counselling in schools and ensure that every child has access to the best possible opportunities by introducing improved careers advice and work experience. The Tories continue to fail the very people that this country’s future depends on. Labour back in power can and must turn things around for the next generation. 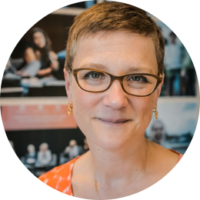 Lucy Caldicott is co-vice-chair of the Fabian Women’s Network and founder of social justice consultancy ChangeOut. She is a former cabinet member in Lambeth and was Labour’s parliamentary candidate in Dudley South in 2019.

View all articles by Lucy Caldicott