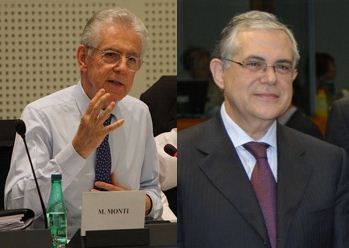 Another week, and another remarkable series of events in the Eurozone.

Lucas Papademos was sworn in Friday as Prime Minister of Greece, prompting a market surge. The day after, Berlusconi resigned as Italian PM, with former European Commissioner Mario Monti a probable successor. When stock markets open on Monday morning, expect a further surge – as happened when rumours circulated that Berlusconi was on the way out.

The reaction in much of the British press to these developments has been rather predictable – that all of this shows some ‘Brussels coup de etat‘, and that the democratic wishes of the people of Greece (and, to a lesser extent, Italy) have been trampled upon by Brussels.

Appointing Papademos as Prime Minister in Greece also means there will not be a referendum in Greece on the bailout package for that country. Sod the fact that a referendum vote would have been like choosing between the devil and the deep blue sea (something that had not escaped the attention of the Greek population who were not braying for a vote), of course not taken into account in the UK coverage.

For all of the political wrangling, there is one economic bottom line in all of this: the breakup of the Eurozone is the worst possible outcome, as Will Hutton points out in today’s Observer, and was most eloquently argued previously by Barry Eichengreen. To achieve that end there is a political consensus at EU level, and within most of the individual countries too, that austerity measures are the way to balance the books and appease the markets. The problem with Berlusconi and Papandreou, so the rationale goes, was that while they promised to make the necessary budget cuts, the markets did not believe that their administrations were capable of doing so, hence the inexorable increase in bond yields. Get in some technocrats (Papademos, Monti) to sort out the national budgets, and all will be OK on the markets.

The problem here then is not so much as a Brussels coup d’etat as a markets coup d’etat. The powers of international finance dictate who they think can and cannot bring national budgets into line. The constraint of being within the Eurozone, and not being able to devalue a currency, nevertheless further limit national administrations. While some technocratic administrations may help matters in the short term, they are no long term solution.

The essential problem is that our representative democratic institutions remain primarily national, while financial flows are global, and in between much of Europe has a single currency. Once the immediate crisis has been averted (and there is some way to go before that is achieved), the inherent contradictions in the EU’s political and economic governance once again need to be looked at.

So arise the technocrats for now, but this must not be allowed to continue.