This morning I attended a Miliband and Balls Q&A. It was a thoroughly depressing experience. Not because of the performance of the protagonists. They performed well, showed that they have an easy rapport and interacted well with the audience. Interestingly Ed Miliband talked about the need to re-engage people with politics. Politicians are largely to blame for that disengagement, but there are others at fault.

Today was a depressing experience, largely due to those sat on Miliband’s left – the press.

Their obsession with trivia is an existential threat to British politics.

As has been the case before when Miliband has spoken to a mixed audience of “ordinary people” and hacks, a yawning chasm opens up between the real life concerns of the electorate and the inside Westminster tittle tattle that fills the head of the average hack. Questions from the public were on the economy, housing, children’s centres and Labour’s lack of discernible policies. The esteemed representatives of the third estate instead went with Jeremy Hunt and leadership ratings. Political nerdery for the nerdiest of political nerds. Hunt is an important issue of course – the role of big business and the media at the heart of government distorts politics in favour of the status quo, but as I argued last week – the economy is the story, especially during a recession.

There will be those who will argue (quite rightly) that there’s something hypocritical about the editor of a political blog complaining about tittle-tattle and political nerdery. We have of course focussed on all of the government’s recent errors, from horses, to pasties to the budget to Hunt. But it’s fair to say if you’re reading this it’s fair to say you’re already a political nerd. I say that with love and respect – from nerd to nerd. Yet journalists – especially broadcasters – should be aiming for something well beyond the village chatter. We all should. But the media loves to talk about itself.

In fairness to the media, they’ve been aided and abetted by the Labour Party. As soon as Miliband devoted 67% of his PMQs question to Hunt last week he gave hacks carte blanche to make the media and the minister the story. From then on a two-track media campaign has been waged, although if you weren’t concentrating hard you’d think there was only one track – Hunt. The party are privately annoyed with the media for not making the double dip recession (the first in decades) a bigger story. But Ed Miliband was complicit. It’s too late now, and Hunt is sucking up all of the oxygen – no matter what the people outside the Westminster village might really care about.

As I left the Q&A the gulf between the people and the press was hammered home. A well known journalist was talking to a member of the public. Inside the Westminster Village heads turn when they enter a room, but this person – interested enough in politics to attend a Q&A with the Labour leader – didn’t have the faintest clue. “Who do you work for?” they asked. A better question might have been “What do you do?”.

What too many journalists do is focus on trivia – like a cheap daytime TV gameshow host – rather than the issues that actually affect people’s lives. Want to know why our politics is borked? Our distant politicians, outdated political parties and the perceived lack of different between our parties and our leaders is largely to blame. But the press must take some share of the blame. They were shown up again today.

And yet in a few moments Ed Miliband will stand up and ask an urgent question of the PM. It’s classic political theatre. The village will be enraptured. It will probably lead the evening news. But it’s the economy they’ll be talking about tonight when I’m out on the doorstep.

Because the chances are it’s not Jeremy Hunt who’ll bring this government down, it’s George Osborne. 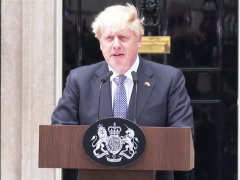