Tory sources have been talking up the prospect of Cameron ruling out another coalition after the election, even if he fails to secure a majority in Parliament, in a move it would be difficult to interpret as anything other than a complete admission that the last four years have been an embarrassing failure.

Several Labour figures, most notably Unite chief Len McCluskey, responded by declaring that Miliband should also rule out the possibility of co-governance. For many, it is hard to contain the feeling that it takes a bold supporter to rule out any scenario that would leave Miliband with a parliamentary majority next May.

Some good news for us though, as polling this week showed that Labour were the least hated party, as only one in three people would not consider giving us their vote. By comparison, the Tories, Lib Dems and UKIP all scored similar 40% “not a chance in Hell” rates. Hopefully, Miliband can ride into Downing Street on the back of a wave of political ambivalence.

It’s been Sir John Major: the Phantom Menace this week (continuing a successful 1980s brand, we all did our best to forget this rubbish instalment fifteen years ago) as the former PM made a characteristic return to the political scene. His main characteristic being that we’d not noticed he was there.

The Conservatives brought back Major on Monday, so that the “working class lad from Brixton” could help to battle the Tories’ image as a bunch of posh boys. Oddly, they then decided not to publicise this event, with no evidence it took place other than a couple of meagre press releases they sent out.

Obviously, if we were to suggest reasons as to why this was it would be mere conjecture. But that won’t stop us.

It could have been they were worried that, in the week Angela Merkel visited to discuss EU renegotiations, having Major about would open old European wounds in the Tory Party that marred his premiership. Or perhaps they thought people would remember the economic mismanagement of the ‘90s, at a time when the economy is one of the few polling subjects they hold a lead on.

Or maybe, just maybe, they were worried that we wouldn’t remember him at all. 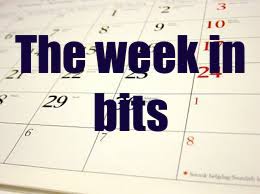 The Week In Bits with Vladimir Putin

Not for a moment did I expect the incredible popularity that this column has achieved. In fact, such is the clout that these words now carry, that Russian President Vladimir Putin has in the past few days threatened to begin his own Week In Bits. His way of taking all of the news from British politics and making it look trivial takes a slightly different form, however. By mobilising troops in western Russia and placing them on alert in response to the events in Ukraine, Putin has successfully made the future career trajectory of Nick Clegg look desperately unimportant. Although personally, I can’t help but feel he overegged it a bit.

And that’s not all!

In Venezeula, too, there is trouble, in the shape of a popular uprising against an increasingly dictatorial president/CIA backed right wing coup against a democratically elected progressive government (delete as politically expedient).

In this inflation-busting week of political unrest (take that, minimum wage rise), people have also taken to the streets in Thailand, Egypt, Bosnia and Turkey, with varying levels of violence. Even John Major looks unimportant now.