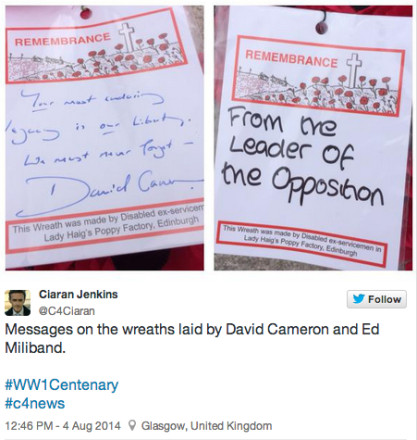 Obviously that looks dreadful. I received texts and tweets aplenty attacking Miliband and his team. One simply said “amateur hour”.

But although this is silly season, I thought it was worth digging into this story to see if it was as bad as it looks. Fortunately, it seems it isn’t.

A Labour source tells me that Miliband was handed it by the organisers seconds before he had to lay it. The message was already written by the organisers, and as Miliband had to place it immediately, there was no opportunity to change it. That’s different to what happens at the Cenotaph for Remembrance Sunday, where all of the leaders are given time in advance to write their own messages. It’s not clear why/how Cameron was able to write a message, or why Miliband’s was handed to him at the last minute, but that’s the explanation from Labour HQ.

It still looks bad, and I fully expect the predictable social media outrage about this – but it seems that on this occasion, that would be more than a little unfair, as the message wasn’t written by either Miliband or his staff.

(If you want to read what Miliband actually said in advance of the ceremony, you can see that here.)

Update: And this appears to be an image of Nick Clegg’s message, written in the same handwriting. It says “From the Deputy Prime Minister”:

Can we put this story to bed now please? 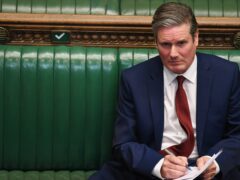