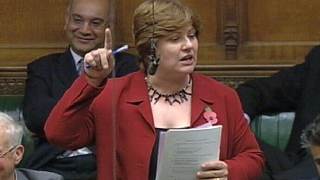 Emily Thornberry’s now infamous tweet from Rochester was clearly a fairly epic mistake – a real “What on earth were you thinking?” moment. Of course the likelihood is that Thornberry wasn’t thinking about how her tweet would be interpreted, the firestorm that would ensue or where, dramatically, the story would end – with Thornberry’s resignation from the Shadow Cabinet.

The tweet appeared crass. It appeared to play into negative stereotypes about Labour MPs not understanding voters, their concerns and their lives.

But I honestly thought the decision for Thornberry to resign (whether her own decision or encouraged) was a mistake. Those close to the Labour leader have suggested – as Thornberry did in her resignation statement – that this shows a determination not to allow anything to get in the way of Labour getting out of opposition. I can see the argument there – and if this “no cock ups” strategy is to be implemented across the board it may have merit. But at present this seems like a wild overreaction.

Now the story tomorrow won’t just be about Cameron losing a seat and an MP to UKIP, it’ll also be about a Labour MP resigning from the Shadow Cabinet over a stupid, thoughtless tweet. That lets the Tories off the hook far too much for my liking, and makes me question whether this couldn’t have been handled better.

But I also want to talk briefly about the Emily Thornberry that I know. I campaigned alongside her in the 2010 election. She’s a passionate campaigner for the people of her constituency – which, contrary to popular opinion, contains areas of real, sustained poverty. And contrary to the snobbish and aloof way in which she’ll be portrayed by the media, Emily is incredibly down to earth – as comfortable drinking a pint on Holloway Road in her constituency as she is in the trendy wine bars of Upper Street.

The tweet was stupid. If she’d thought about it – and how it would be received – I hope she wouldn’t have sent it. And she definitely shouldn’t have gone out into the press to defend her remarks and give the story legs – that compounded the error. But the Emily Thornberry the public are going to hear about isn’t the Emily Thornberry I know – brought up in a council house in Guildford and proud of it. And that’s a real shame.