Most LabourList readers are against the introduction of the five year Parliament, with 67% saying that they didn’t think this was a good idea. This could be for many reasons – arguments against fixed-term parliaments include the way in which politics revolves around the election in the year leading up to it . There’s also no evidence to suggest fixed-term elections make for better government. And, I think we can all agree, the past five years has felt pretty long…

A much smaller 26% are happy with the fixed term, presumably because they see this change as undercuts the advantage the party in power might have as they can no longer choose the timing of the election. Fixed term Parliaments are already used in Scotland, Wales and Northern Ireland so why not for Westminster?

Last week Ed Miliband said he wanted Labour activists up and down the country to have 4 million conversations on the doorstep. Although this isn’t an impossible target, we wanted to know how often your Constituency Labour Party (CLP) currently organises campaigning activities.

39% of people said at least once a week, which 4 months before the general election is pretty good. But what isn’t so good is that 29% of LabourList readers said they didn’t know. Of course, this could mean that the CLP does organise canvassing regularly but the people answering the survey aren’t aware of this. However, it might also suggest a potential problem of insular CLPs, not effectively communication with people in the constituency who may be willing to campaign in the run-up to the general election (and if you’re taking part in a LabourList survey, you’re probably interested in the outcome of the election).

The rest of the answers were in the same ball park – 7% every day (which is really very impressive, but perhaps where most target seats should be by now), 6% once a fortnight, 8% said less than once a month and 3% said none. 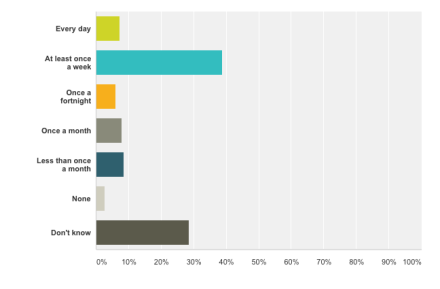 56% think Labor won’t get a majority but will be the largest party. This isn’t exactly the kind of result any Labour supporters are working towards but given the close nature of recent polls it isn’t the worst case scenario by any means.

However, 26% do think Labour will win a majority, while only 2% think the same of the Tories. 10% think the Conservatives will be the largest party and 6% simply say they don’t know. On that basis, it’s fair to say that the majority of LabourList readers believe that Ed Miliband has a strong chance of being Prime Minister in May, but the percentage who are confident in that is far lower. This really is shaping up to be an incredibly difficult to call election. 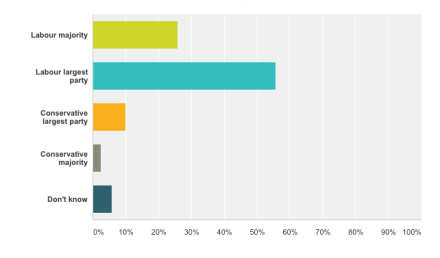 655 people voted in this week’s survey. Thank you to everyone who took part.