Delhi’s Spring has come early. A charismatic right-wing leader with rich backers has been defeated by a mass movement with roots on the left. A party that exudes power was destroyed by an organisation whose guiding force is humility. 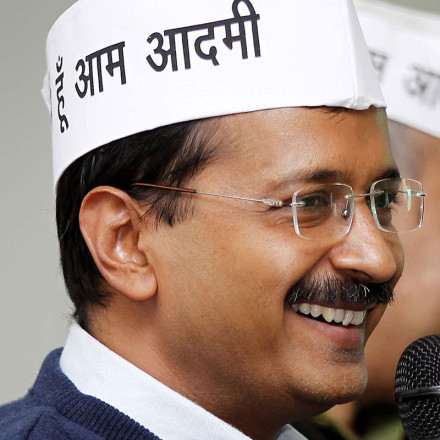 Last week’s victory for the Aam Aadmi Party in Delhi’s state elections was almost absolute, as the party won 67 out of 70 seats. The result is all the more remarkable coming only ten months after Narendra Modi’s landslide general election win. Modi’s victory seemed to show that India needed to be governed by a strongman. It suggested that a campaign exploiting social divisions that promised to use the dictatorial power of the central state to drive economic growth beats everyone else. AAP’s victory shows that that story is wrong; you can reinvent politics and win. Labour should learn big lessons.

First is how to learn from failure. The political wing of a populist anti-corruption movement, Aam Aadmi won enough seats to form a minority government in Delhi in 2013. But its leader, Arvind Kejriwal, resigned after 49 days when the demands he made of the central government were turned down. The party was trounced in the general election the following year. Political commentators thought AAP was down and out. But AAP picked itself up, learnt why they lost support, and responded with a reassuring set of promises. For example, people feared AAP was just a protest movement not interested in government. The slogan last month directly countered that – panch saal kejriwal, five years of Kejriwal.

At the party’s core is an army of volunteers who work in neighbourhoods listening to problems, acting on the spot where they can, defining policy answers where needed. Many of AAP’s candidates are social activists, who’ve already worked in the places they now represent. AAP’s campaign was rooted in the ‘Delhi Dialogue’, a city-wide series of meetings where citizens met with academics and policy practitioners and figured out answers. The end-result were 70 different manifestos, one for every seat. As AAP’s website put it ‘good governance happens when people have the power to influence decisions that shape their life.’

The third, and perhaps most important point is this – it is the process not the policies that matter.

AAP’s listening led to a few eye-catching city-wide promises, most importantly every dwelling getting connected to the electricity grid. But a list of promises didn’t elect AAP. They were elected because of the way they worked. AAP’s revolutionary move is to treat citizens with humility and dignity. Their vision statement isn’t a series of vague values. It defines how volunteers should practically behave. They should be simple and approachable ‘gracious in defeat and humble in victory’, should never over-commit and under-deliver. In this deeply hierarchical society, AAP’s success came from treating the poor with dignity and respect, working relentlessly door to door when everyone else had ruled them out.

‘Aam Aadmi’ means ‘common man’. What’s most striking about AAP is their ordinariness – an ordinariness that is crafted and kept in check by clever media management, but real nonetheless. AAP’s leader is the anti-politician. Until 2006 Arvind Kejriwal was a tax official. He is the man who wears the V-neck sweater, shabby scarf and glasses against Narendra Modi’s £1000 pin-striped Nehru jackets. While Modi looks flash, Kejriwal looks like every other forty-something man on the streets of Delhi, stuck sitting in traffic jams. But this ordinariness is combined with an extraordinary grasp of his brief. He’s not charismatic, but Kejriwal knows what he’s talking out.

AAP doesn’t offer a radical ideological challenge to the established order. Instead, it twists the glib language that all politicians spout so it connects to the real world. So, where Modi (and Cameron for that matter) talk about ‘delivery’, Kejariwal tells us what delivery means in practice, that it is difficult, takes time, but needs to be sure. While Modi chants the mantra of ‘good governance’, AAP activists show how in practice good governance relies on giving people power to shape their lives. It’s a continual move they make, reshaping consensus political rhetoric to connect with our common lives.

All this happens because AAP is run by people who’ve done a lot of difficult thinking about what’s wrong with politics and what needs to improve. Aam Aadmi’s leadership is stuffed full of the best scholars. But unlike in Britain, tough thinking doesn’t create gobbledegook. AAP has no equivalent of pre-distribution. Instead, thought has gone into redefining how to do politics at its most basic, down even to the kind of conversations volunteers have.

Aam Aadmi’s politics comes from of a distinctively tradition of ethical protest that includes, of course, Gandhi. That tradition is distinctively Indian. But it created a style of politics similar to the form community organising Arnie Graf advocated while he worked for Ed Miliband. Aam Aadmi’s success shows that a community-focused style of politics can win elections – and win them big. But it also demonstrates that success depends on a radical transformation in political attitude.

Aam Aadmi are disciplined and focused, but they are willing to criticise themselves and learn from mistakes. They combine self-belief with a willingness to properly listen. It’s a politics based on action but also humility. We need something like it here, now.

Jon Wilson is an historian at King's College London, where he helped lead the campaign for a Living Wage. He is an activist in Greenwich and Woolwich, and a member of Movement for Change's National Executive.