Ed Miliband being interviewed by Russell Brand was a risk. Of course it was – he’s previously adopted some bizarre political positions and turned up to work on September 12th 2001 dressed as Bin Laden, so to argue otherwise would be pointless – but it was a risk worth taking. 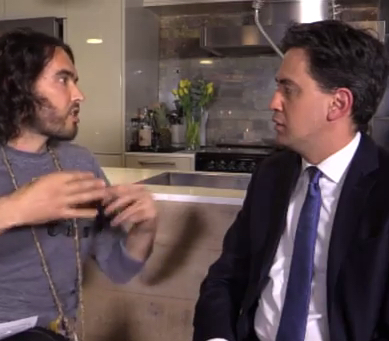 Brand has almost ten million followers on Twitter, a million subscribers to his YouTube channel and has been a vocal (and sadly all too successful) exponent of the argument that politics and voting doesn’t matter. By this evening I’m sure more than a million people will have watched MiliBrand (as it’s destined to be known). Hundreds of thousands of people who wouldn’t otherwise vote will watch a political leader address them and (some of) their concerns seriously.

If that means having to argue about global capital with Russell Brand in his kitchen, then so be it. In terms of impact on the election, such an interview may have more impact on undecided and swing voters than tomorrow’s Question Time – because if you’re watching election question time there’s a decent chance you already know how you’re voting.

Whilst Brand gave Miliband a platform, he also banged on so long that every question became a lecture. Yet Miliband reacted well. And if you can come out of interviews with Paxman and Brand – and come across as decent, serious and thoughtful – you’ve done better than either Paxman or Brand managed when they’ve gone head to head.

But Miliband didn’t just put himself out there today, he actually – perhaps to the most thorough extent he has in some time – took on one of the biggest issues on British politics, economics and society. Something which is at the root cause of political malaise and sclerosis.

Ed Miliband talked about where power lies in Britain, why that matters and how it needs to change.

Now that’s a message that resonates with people from all walks of life. Most of us (unless we are wealthy, well connected or perhaps both) are buffeted by forces that feel beyond our control. Banks, companies and – yes, sometimes – the state often treat people as if they are numbers on a spreadsheet or an elaborate piggy-bank-come-to-do-list. We feel powerless against these forces, and yet the system in which we live often seems to give those forces primacy over the needs of the majority. That’s one of the key drivers of people saying that voting doesn’t matter. That’s one of the reasons why people say that whoever wins elections nothing changes. Not because people don’t care about the difference between Tory and Labour visions of the country, but because a great deal of their lived experience feels precarious and powerless either way.

And that counts doubly for those most likely to be in Brand’s audience, the young precariat, who went into the job market and the housing market after the 2008 crash and have never known anything but a gnawing sense that something isn’t right, as they struggle to get by on their crap wages in their overcrowded shared house.

So Ed Miliband talking about power – often a lofty academic debate – really matters. He should have been doing more of it. He’s waxed and waned when it comes to focusing on it explicitly. But it should be at the forefront of Labour’s message, not only because it’s a clear “big picture” story about how a Miliband government would change Britain. But because it really bloody matters.

Not – as Miliband rightly noted – because as PM he could click his fingers and change a nation. But because the constant, bottom up struggle for a better Britain that is the real story of the labour movement would have an ally in Downing Street – someone to hear and heed the call for change.

Ed Miliband’s Brand interview was a risk. Of course it was. But what he said really matters. And if enough minds were changed by him doing so in that format, there’s a better chance that Miliband – someone who seems to know that power needs to be more in your hands and less in his – might be Prime Minister.

And that’s why this election matters.