Here we go again. I can only assume that “attack Labour and the union link” was gridded into the Tory campaign weeks ago, and the Daily Mail have dutifully delivered with their spittle flecked scaremongering headline this morning: 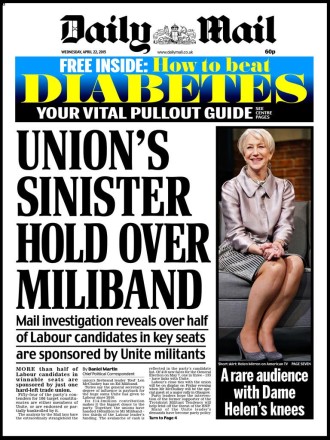 Where to begin. Well we hate to have to explain the Labour Party’s foundation (as the Parliamentary representatives of the Labour movement and working people) because they’re not interested in the facts – only the insinuations (is there an election on?). And if there’s anything “sinister” going on it’s that the Mail are rehashing a similar attack article from The Sun from six months ago(£), and calling it a “Mail investigation”.

Still, the Mail’s entire argument breaks down on one single basis. To be a Labour Party member – that’s member, not Parliamentary candidate – you’re meant to be a member of a Trade Union. Here’s the relevant section of the Labour Party’s rule book: 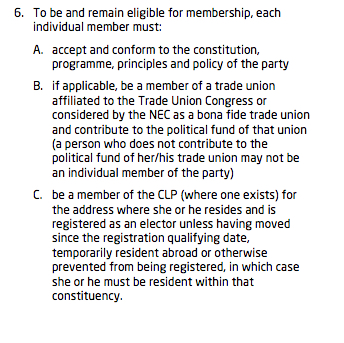 Now Unite are one of the largest unions in the country with over a million members, so it’s not surprising that many Labour candidates – who have to be trade union members – will be members of Unite. And considering that Unite are one of the biggest financial backers of the Labour Party, it’s unsurprising that some candidates who are members of other unions might also be backed in the election by Unite. In fact, if I was surprised at all by the numbers that the Mail (and the Sun before them) managed to reel off, is that it’s only a third of Labour candidates.

Because whilst the Tories might prefer to rake in the cash from those who dine with the Prime Minister behind closed doors – union donations to the Labour Party, and their support of candidates, is incredibly transparent.