We already know that the Tories co-ordinated tweets in advance last night.  But strangely, this tweet appeared, but was promptly deleted (image via Jeremy Cliffe): 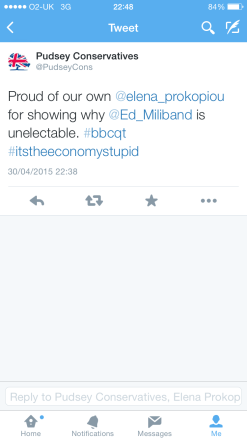 Fantastic to see one of our members @elena_prokopiou grill @EdMiliband_MP on his denial of over spending.. How can we trust him?

Elena – whose Twitter bio is “Cats, Conservatives & Chelsea FC” was one of the people who asked Miliband a rather aggressive question last night. You’d have thought the BBC might have filtered out party supporters and activists from the audience. That’s a recipe for planted questions, like, maybe…accusing Miliband of having overspent and asking how he could be trusted again?

Update: Even more awkwardly – she referred to the Tories as “we” in her question…

Prokopiou appears to have made her Twitter account private now for some reason…but beforehand, this was screen grabbed. She really likes Jeremy Hunt. 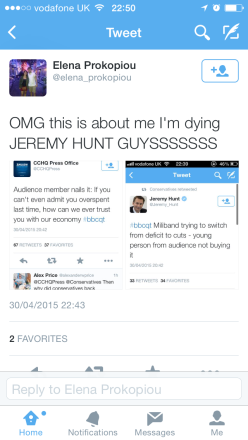 But what can the BBC do about people who declared that they were undecided voters? 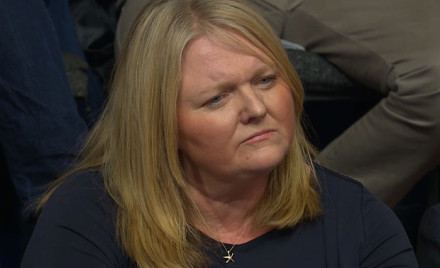 Well according to the Telegraph, Catherine Shuttleworth – the owner of a marketing business who memorably harangued Ed Miliband about how difficult times were for Tesco and told him to sack Ed Balls – “applied to join the Question Time audience as an undecided voter”.

Ok…no issue there…except the Telegraph also says that she “gave a thumbs-up to George Osborne in the spin room”.

(Update: An audience member not only in the spin room but also doing broadcast media afterwards.)

Probably just excited to see a politician she knows from TV…maybe? This made us think again about Ms Shuttleworth, so we looked into her. She’s successful so it wasn’t too hard to find details about her, or her company “Savvy”. It didn’t take us long to find a profile in the Yorkshire Post, which contained this line:

“After doing some consultancy, she had the opportunity to pitch for the Asda business. She won it and set up Savvy as a result. Three people made up the business, including Ms Shuttleworth and Ms Skelton, plus company secretary Andrew Jones, who is now MP for Harrogate.”

So this would-be Miliband interrogator is just the sort of ordinary undecided voter who gives George Osborne a thumbs up in the spin room, and set up her a business with a Tory MP. Oh – and she signed the Tories much mocked “small business letter” too – number 3882 – which the Telegraph forgot to mention when they wrote up a piece on her attacking Miliband. So much for undecided.

Update: Here are couple of this “undecided” person’s most recent retweets (from well before Question Time):

Update: A source in Labour HQ tells us that “There’s quite a lot of anger that the BBC could let this happen” and that they’re particuarly annoyed that “Cameron has dodged the face to face debate – and now this has happened”

Shuttleworth signed (and tweeted about) the Tory business letter which called for another Tory government well before going on the show, which said “We would like to see David Cameron and George Osborne given the chance to finish what they have started. A change now would be far too risky and would undo all the good work of the last five years.” She says she’s undecided, but we think the facts speak for themselves.