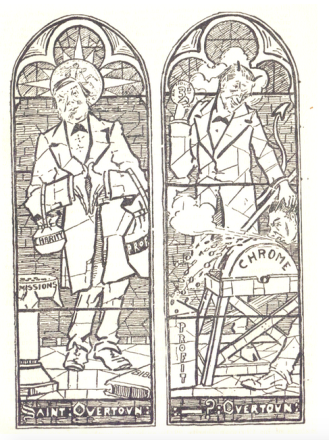 Hardie is thought of as the cloth-capped firebrand in the House of Commons, but most of his notoriety came from his work outside Parliament, his campaigning, his exhaustive public speaking and his journalism. Hardie established his own newspaper, The Miner, which, as Hardie’s focus shifted from the industrial to the political, was renamed the Labour Leader. He used it to better form the ideas of the new Labour party and to agitate. When the names of prostitutes prosecuted were published in the newspapers but not their wealthy clients he had the customers of a Glasgow brothel followed home and printed their names. Another target was the hypocritical owner of a large chemical works, prominent Christian philanthropist Lord Overtoun. Overtoun’s own employees were forced to work seven days in the toxic environment of his chemical works which dissolved the insides of their noses. The articles he published attacking Overtoun were sold as a pamphlet “the White Slave Series” and were a sensation. Extracts are below. Eventually Overtoun gave in and improved the conditions of his workers.

From The Labour Leader, January 1899.

I wish I could adequately describe a day’s work, so that my readers could fully understand its horrors. The men in the day shift go into begin work at six in the morning. The vapours and fumes from the chemicals are all about them all the time, eating away the cartilage of the nose and poisoning the blood, so that the stomach in time will only contain certain kinds of food, and an intense desire for stimulants is generated. A dry dust floats in the atmosphere, which gets into the throat and produces an arid, burning feeling. The surroundings, as stated, are all of the gloomy depressing kind. Once every hour the two men who work the furnace have to draw their charge of molten chemicals. At this time a sweet, poisonous gas is thrown off, which the men inhale every time they breathe. The charge is put into a small truck, which the men draw with a hook and empty at the appointed place. In some cases this is not more than a few feet from the furnace, and the men have to work with the hot, glowing mass at their back and the roaring furnace in front…

And this goes on all the day without a break until six o’clock in the evening. Twelve weary, wretched hours. For it will be scarcely believed, but it is none the less true, that there are no meal hours allowed these men. From six in the morning until six at night without a stoppage. It sounds incredible, and yet it cannot be denied. Food has to be snatched in mouthfuls as best the men can whilst carrying on their never-ceasing task. With their hands soiled with the poisonous chemicals they handle, inhaling a poison-laden atmosphere, they ‘dine’ in the fashion here stated. Twelve hours a day and seven days every week. For there is no rest for these men. If a man dares to stay away from work on Sunday to attend Church or Chapel he is punished by being compelled to lose Monday’s wages also…

…I believe in Christ’s Gospel of love and brotherhood and service. I know that Lord Overtoun is of the same hard, self-righteous type as the Pharisees of old were, and now that his profession and practice, differ so widely as they do, is a stumbling-block to many, especially to young men. I am not attacking religion, but I meant to try whether the conscience of the Christian Church cannot be stirred up on this matter as to insist on men who make so much profession of Christianity as Lord Overtoun makes first of all giving some evidence of the faith that is in the by their treatment of the workpeople. If they will not treat these humanely, then the Church should not accept for its altar the blood-stained gifts which have been procured by the destruction of men, body and soul.

Lord Overtoun I don’t know, and have no personal animus against, and as soon as he puts his work at Shawfield in order on lines which everyone will admit to be fair, I will cease from troubling. Until he has done so, I will do my best to make it impossible for him to appear on a public platform in Scotland. If we both live he will find this no vain boast, no idle statement.