Caroline Flint MP chaired the most recent meeting of Labour for the Common Good group in Parliament – this is her report. You can read all reports of the meetings here.

Politics is often a battle between head and heart, instinct and reason. The heart often wins.

In the case of Labour people, that instinct for social justice, hostility to privilege or unfairness is no bad thing. It’s what makes us Labour.

But elected politicians and activists can be guilty of only hearing the feedback we want to hear, and discounting the rest.

In 2015, the polls overstated Labour’s support – but you can’t ignore them altogether.  In 2014, I canvassed in my constituency on 59 occasions.  Out team met over 9,000 people during the election campaign.  Those conversations leave strong impressions.  But a thousand conversations in Doncaster don’t tell me the feelings of voters in Dunfermline, Dover, Dorset South or Dolgellau.

So all UK political parties apply science to their campaigns. Because polling matters. Used properly, polling data provides invaluable insight into what voters think: of us, of what we stand for, whether they think we understand them (being “in touch”).  Like good conversations, it gives you glimpse into the minds of voters, where they are coming from, and how best to convince them to vote Labour.

So this week, we asked Ian Warren, to address a meeting of Labour for the Common Good.  Ian has correctly forecast election results for over 10 years (he funded his PhD studies from political betting), worked for Labour’s 2015 campaign, and currently runs the Election Data website. We also heard from Laurence Janta-Lipinski,Associate Director at YouGov, an expert on social and political polling.

Ian and Laurence presented us with extensive polling.  Their overall message was simple: move away from the public on the issues that are important to them, and they are less likely to vote for you. Sounds obvious, but it’s a lesson Labour needs to learn, quickly.

For too long, we have sidestepped the concerns of voters: making the case for more immigration while the public became increasingly anxious about the way their communities were changing; refusing to reign in business excess, while many struggled to get by; and not being responsive to legitimate demands from taxpayers to keep a tight rein on public spending to “balance the books”.

Failing to listen to voters’ biggest concerns isn’t new. This was true in the run up to 2010 and 2015. It’s still true today.

So what does the data tell us?  First, political activists aren’t like other voters. As Laurence put it – “members of political parties aren’t normal”.  Just think how closely we follow politics, the argument, the debate.  Every moment of Duncan Smith’s resignation.  And we have strong opinions.  Most people don‘t.  For most, politics is background noise.  Occasionally, they give it more attention, when a big event occurs.

That difference, our motivation, means the views of members and activists of all parties can fall out of step with those of the general public. Labour members prioritise health, housing and welfare benefits – of which only health is very important to the public, along with the economy, defence/terrorism and immigration.

When it comes to immigration, the divide becomes stark.  78% of Labour members agree that immigration is good for the economy.  Only 29% of the public do. The public see immigration as the most important issue facing the UK – by a country mile.  Members don’t.  This should give us pause for thought. 60% of people think it is important, compared to welfare 21%, housing 20% education 13%, environment 10%.

Labour can have better answers on all those issues and still not get a hearing from voters, because we don’t talk about the one thing that is their biggest concern – immigration.

Without doubt, Labour has attracted a new following.  New support. The polling shows new supporters are more likely to oppose Trident renewal, be pro-immigration, oppose limits on welfare, and not think patriotism is important.

Since the general election, Labour has also lost supporters who back Trident, think immigration has good and bad effects, think welfare must have limits, and patriotism is important. 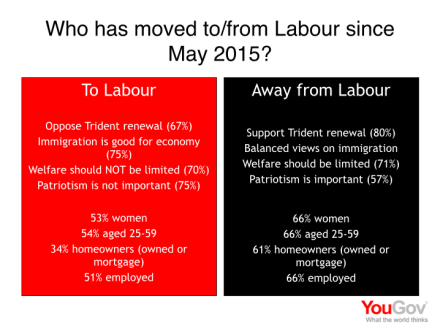 Our problem is they don’t cancel out.  This shift makes Labour stronger in just nine marginal seats. But less likely to win in every other marginal seat.  If Labour continues to represent only cosmopolitan cities, university seats and northern bastions – we are destined for a permanent Tory Government.  The winners in small town Britain win general elections. 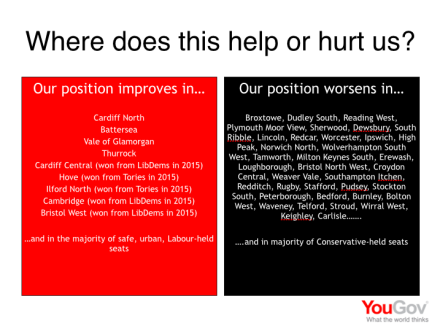 So how does Labour bridge this “disconnect”, to use the jargon? One option Laurence set out is to try to convince voters to care about the same issues we do.  But in doing this, the implication is that we believe they are wrong to care most about the issues they do.  That’s a tough conversation to have.

A second option, perhaps the only option, is to take the fight to our competition, and address head on the issues people are most concerned about: immigration, national security and the economy. The evidence is clear: we are losing more Labour supporters than we’re gaining in the parts of the country that will decide the outcome of the next election.

We don’t need to dilute our core principles, our instinct for social justice, equality, for giving people a hand up. It does mean showing the public that their concerns are legitimate.

If we’re not listening to voters – if we shy away from talking about what they care about most – why should we expect them to listen to us when polling day comes around.