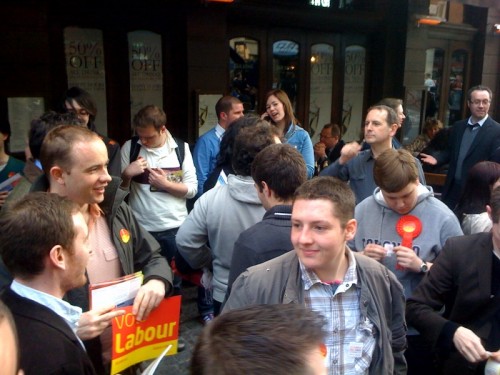 With just over a week left of the campaign, here are my top ten tips for securing a Labour win in your local area – or at least the very best result possible – on 5 May:

1. Elections outside of a General Election are all about differential turnout – getting more of our core Labour support to turn out than our main local opponent does of their support. So this final period should focus on motivating known Labour supporters to turn out through a combination of doorstep visits and compelling messages in literature – you need to set out in stark terms what is at risk in terms of unfair and excessive cuts if Labour supporters don’t vote.

Unless you have so few Labour supporters in the area that you have to convert supporters of other parties, in a low turnout mid-term election then five short chats that remind five Labour folk to vote are far more worthwhile than one long conversation with someone undecided.

2. Any local campaign needs a narrative – a story about what the choice is in the election. It’s not too late to get a compelling narrative running in the final 10 days. In some cases this will be about control of the council and what impact that will have, in other places where the council control is not in doubt you need to tell voters why having a Labour councillor in their ward will positively affect them and their community, and what it is about our candidate that should make them want to be represented by them.

We should explain how our democratic socialist values inform and inspire how we act as campaigners and elected representatives so that people understand Labour is qualitatively different to the other parties, not just a better set of managers (though we need to demonstrate competence too). If we are not proposing to run things differently to other parties because we have different values, I am not clear why we would be putting ourselves up for election.

3. If you haven’t been putting out addressed, enveloped direct mail (though still hand-delivered) now is the time to do it. It’s easier to produce as a campaign add-on than an extra leaflet is, as no design skills are required, and even though this is not new technology, in areas where only one party is doing it it has a huge impact and is many times more likely to be read than a leaflet is.

4. The longer daylight hours mean you can get more out of each evening’s campaigning than you could even a month ago. So go up a gear by finishing canvassing half an hour later (adding 30 minutes to a 90 minute session is a 33% productivity increase) and then doing 30 minutes or an hour brisk leafleting after it gets too late to knock doors. And there is a three day weekend coming up due to the Bank Holiday!

5. The final ten days are the perfect time to create a sense of momentum with a poster campaign. This needs two people – one whose skill is charming known Labour supporters into putting up the biggest possible poster in their window or garden, and one who has a van and some practical skills in erecting garden stake posters to follow round and put them up.

6. If you have legitimate, evidence-based reasons why people should not vote for your main opposition party (e.g. a list of cuts they voted for and we didn’t, a map showing their candidate lives miles from the ward), voters ought to hear about them. The leaflet or letter explaining why you shouldn’t vote for party X needs to go out on the day before polling day so the opposition won’t have time to respond.

7. Candidates should use the campaign to set their to-do list for their term of office in the form of some firm and achievable pledges specific to the ward. Then you have a task list rather than just being a bum on a seat at the town hall, and can report back at the next election that you have done what you promised.

8. Plan polling day now – decide whether your resources mean you can run a full operation with number takers, or just blind knocking up of Labour supporters with WARP (Without All those Reading Pads) sheets. Change the resources you have by calling all those new members and explaining the difference they can make by helping on the day. Schedule exactly what areas will be visited in what order on the day (e.g. areas with lots of older voters who will be, early in the day) and particularly where the candidate will be – if you don’t plan it the time will skid past and you will find you have reached peak turnout time (4.30pm-8pm) without achieving very much.

9. The count is part of the campaign not a social occasion. It yields helpful data for future elections about which polling districts are best for Labour, and proper scrutiny of spoilt votes and votes misallocated to the wrong party pile etc. can make the difference between winning or losing a close election.

10. Plan and look forward to the rest and treats you are going to reward yourself with after polling day – you will need a rapid battery recharge before throwing yourself into the European referendum campaign.