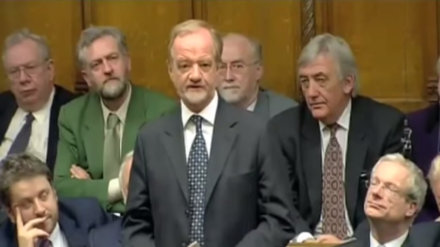 In 2003, Robin Cook resigned from Tony Blair’s shadow cabinet over his Government’s failure to secure international support for the Iraq War. The blow is his resignation speech to the House of Commons.

This is the first time for 20 years that I have addressed the House from the back benches.

I must confess that I had forgotten how much better the view is from here.

None of those 20 years were more enjoyable or more rewarding than the past two, in which I have had the immense privilege of serving this House as Leader of the House, which were made all the more enjoyable, Mr Speaker, by the opportunity of working closely with you.

It was frequently the necessity for me as Leader of the House to talk my way out of accusations that a statement had been preceded by a press interview.

On this occasion I can say with complete confidence that no press interview has been given before this statement.

I have chosen to address the House first on why I cannot support a war without international agreement or domestic support.

The present Prime Minister is the most successful leader of the Labour party in my lifetime.

I applaud the heroic efforts that the prime minister has made in trying to secure a second resolution.

I do not think that anybody could have done better than the foreign secretary in working to get support for a second resolution within the Security Council.

But the very intensity of those attempts underlines how important it was to succeed.

Now that those attempts have failed, we cannot pretend that getting a second resolution was of no importance.

France has been at the receiving end of bucket loads of commentary in recent days.

We delude ourselves if we think that the degree of international hostility is all the result of President Chirac.

The reality is that Britain is being asked to embark on a war without agreement in any of the international bodies of which we are a leading partner – not NATO, not the European Union and, now, not the Security Council.

To end up in such diplomatic weakness is a serious reverse.

Only a year ago, we and the United States were part of a coalition against terrorism that was wider and more diverse than I would ever have imagined possible.

History will be astonished at the diplomatic miscalculations that led so quickly to the disintegration of that powerful coalition.

The US can afford to go it alone, but Britain is not a superpower.

Our interests are best protected not by unilateral action but by multilateral agreement and a world order governed by rules.

Yet tonight the international partnerships most important to us are weakened: the European Union is divided; the Security Council is in stalemate.

Those are heavy casualties of a war in which a shot has yet to be fired.

It is precisely because we have none of that support in this case that it was all the more important to get agreement in the Security Council as the last hope of demonstrating international agreement.

The legal basis for our action in Kosovo was the need to respond to an urgent and compelling humanitarian crisis.

Our difficulty in getting support this time is that neither the international community nor the British public is persuaded that there is an urgent and compelling reason for this military action in Iraq.

The threshold for war should always be high.

None of us can predict the death toll of civilians from the forthcoming bombardment of Iraq, but the US warning of a bombing campaign that will “shock and awe” makes it likely that casualties will be numbered at least in the thousands.

I am confident that British servicemen and women will acquit themselves with professionalism and with courage. I hope that they all come back.

I hope that Saddam, even now, will quit Baghdad and avert war, but it is false to argue that only those who support war support our troops.

It is entirely legitimate to support our troops while seeking an alternative to the conflict that will put those troops at risk.

Nor is it fair to accuse those of us who want longer for inspections of not having an alternative strategy.

For four years as foreign secretary I was partly responsible for the western strategy of containment.

Over the past decade that strategy destroyed more weapons than in the Gulf war, dismantled Iraq’s nuclear weapons programme and halted Saddam’s medium and long-range missiles programmes.

Iraq’s military strength is now less than half its size than at the time of the last Gulf war.

Ironically, it is only because Iraq’s military forces are so weak that we can even contemplate its invasion. Some advocates of conflict claim that Saddam’s forces are so weak, so demoralised and so badly equipped that the war will be over in a few days.

We cannot base our military strategy on the assumption that Saddam is weak and at the same time justify pre-emptive action on the claim that he is a threat.

Iraq probably has no weapons of mass destruction in the commonly understood sense of the term – namely a credible device capable of being delivered against a strategic city target.

It probably still has biological toxins and battlefield chemical munitions, but it has had them since the 1980s when US companies sold Saddam anthrax agents and the then British Government approved chemical and munitions factories.

Why is it now so urgent that we should take military action to disarm a military capacity that has been there for 20 years, and which we helped to create?

Why is it necessary to resort to war this week, while Saddam’s ambition to complete his weapons programme is blocked by the presence of UN inspectors?

Only a couple of weeks ago, Hans Blix told the Security Council that the key remaining disarmament tasks could be completed within months.

I have heard it said that Iraq has had not months but 12 years in which to complete disarmament, and that our patience is exhausted.

Yet it is more than 30 years since resolution 242 called on Israel to withdraw from the occupied territories.

We do not express the same impatience with the persistent refusal of Israel to comply.

I welcome the strong personal commitment that the prime minister has given to middle east peace, but Britain’s positive role in the middle east does not redress the strong sense of injustice throughout the Muslim world at what it sees as one rule for the allies of the US and another rule for the rest.

Nor is our credibility helped by the appearance that our partners in Washington are less interested in disarmament than they are in regime change in Iraq.

That explains why any evidence that inspections may be showing progress is greeted in Washington not with satisfaction but with consternation: it reduces the case for war.

What has come to trouble me most over past weeks is the suspicion that if the hanging chads in Florida had gone the other way and Al Gore had been elected, we would not now be about to commit British troops.

The longer that I have served in this place, the greater the respect I have for the good sense and collective wisdom of the British people.

On Iraq, I believe that the prevailing mood of the British people is sound. They do not doubt that Saddam is a brutal dictator, but they are not persuaded that he is a clear and present danger to Britain.

They want inspections to be given a chance, and they suspect that they are being pushed too quickly into conflict by a US Administration with an agenda of its own.

Above all, they are uneasy at Britain going out on a limb on a military adventure without a broader international coalition and against the hostility of many of our traditional allies.

From the start of the present crisis, I have insisted, as Leader of the House, on the right of this place to vote on whether Britain should go to war.

It has been a favourite theme of commentators that this House no longer occupies a central role in British politics.

Nothing could better demonstrate that they are wrong than for this House to stop the commitment of troops in a war that has neither international agreement nor domestic support.

I intend to join those tomorrow night who will vote against military action now. It is for that reason, and for that reason alone, and with a heavy heart, that I resign from the government.