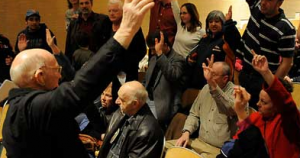 After a period of great turmoil and division in the party nationally, and huge change in the composition of local CLPs, how do you create and maintain unity at a local level?

I’ve got some experience of this having helped over a 16 year period to create a very positive culture of comradeliness and team spirit in Hackney, working as part of a team of CLP officers with people from the Labour left who disagreed with me on many policy issues and national internal elections but found common cause in wanting a healthy and happy local party.

This was in a borough where the local party had been divided, often very bitterly, along three different lines of cleavage: left vs right (it’s not every CLP that had yours truly, the secretary of Labour First, turn up to the same meetings as Diane Abbott and members of the editorial boards of both rival versions of Labour Left Briefing); North vs South (many two CLP boroughs have some kind of geographical rivalry); and most notoriously a split in the mid-1990s over control and policy of the council Labour Group which led to 17 of 46 councillors changing party.

It doesn’t involve compromising on arguing for your beliefs or on trying to win votes on policy or personnel within the party’s democratic structures. It’s mainly about how you behave towards each other, and the culture this creates at meetings and other events.

We got a lot of things right but also some things wrong.

Here are my top ten tips for creating local unity, applicable whichever wing of the party you come from:

1) Campaign together as a united Labour team and with no reference to the internal politics of the candidates, of the people doing the organising or of your fellow doorstep foot soldiers. In fact you should campaign hardest for people from the opposite wing of the party so they know any rivalry ends once a selection is decided. If you stood on the doorstep come wind or rain with someone, canvassed for them and they canvassed for you, you’ll remember that more than you will remember disagreeing about who should be party leader.

2) Socalise together. Use icebreaker exercises and the way you do table plans at CLP fundraisers to make people with different politics sit and eat and drink and get to know each other as people at social events.

3) Change the format of meetings to make them less confrontational. Serve tea and coffee as people arrive. Sit in a circle not rows so you can see each other. In Oxford where I live now we break up our huge all member meetings into small groups to discuss contentious issues in a deliberative and conversational way, not via fiery rhetoric to a big plenary. People want a serious discussion about politics, not a re-enactment of the Petrograd Soviet.

4) If you are a longstanding member, recognise how intimidating it is for new members to get involved. Go up and talk to new faces before and after meetings. Welcome them. Create systems for buddying-up where veteran members mentor new ones and guide them through how the party works and how to get involved in campaigning.

5) If you are a new member, recognise what the longstanding members have invested in the party in terms of years of their spare time. You don’t have to agree with someone to respect their commitment or learn from their campaigning of organisational experience.

6) Firm but fair chairing is essential. A strong chair of a meeting can stop legitimate robust debate about policy or process from boiling over into rancour and uncomradely discourse.

7) Avoid the personal. When you disagree with someone’s politics don’t do it in a way that makes them feel uncomfortable about expressing themselves, that de-legitimises their role as a member, or means they wouldn’t want to have a drink with you after the meeting or go campaigning with you.

8) Look for what you can all agree on not what you disagree on. Find campaigns the whole CLP can unite around, whether that’s winning an election or opposing a Tory cut to local service. Celebrate the practical achievements of your local Labour MP and councillors. Don’t have debates about divisive issues for the sake of it just to expose where dividing lines are – these are often on big international issues a single CLP can have no impact on other than to divide itself.

9) Don’t politicise and factionalise internal elections that are not inherently political or where there is an obvious candidate from any wing of the party who will do the job well. Chairs should be the person who is best at chairing meetings. Secretaries should be the person who is best at admin. Treasurers should be the ones that know how to do accounts. Agents should be the ones who know how to fight elections. When you pick council candidates their national views should be of very little importance compared to the skills and local knowledge they will bring to the council, and the energy and campaign skills that will get them elected. If you do end up with contested elections in your CLP win them by positive organising – mobilising more of your side to turn out, reaching out to swing and  undecided voters, not negative organising – blocking people from involvement – which alienates and causes bitterness.

10) Treat other members as you would want to be treated. Politics is fluid so the group that is in a majority now in a CLP won’t necessarily be in a majority next year or the year after. The vast majority of Labour members historically have refused to identify firmly with any wing, faction or grouping anyway, and come to meetings just as individuals who care about Labour. Follow the thinking of the great political philosopher John Rawls, whose Theory of Justice posits that any organisation of society should be arranged to the greatest benefit of the least-advantaged member of it – one day you might be the person in the room with the least power and the minority opinion, so you would want the Labour’s internal rules and culture to protect your rights.