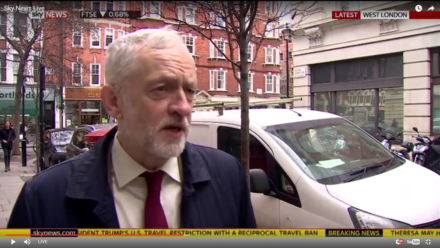 This is the full statement published Jeremy Corbyn after he wrote to Theresa May demanding she withdraw her offer to Donald Trump of a state visit.

“Let no one be in doubt that I will oppose, and the Labour Party will oppose, all those who fan the flames of fear at home and abroad.

“I support the demand of millions of British people: Donald Trump should not be welcomed on a state visit to this country while he continues to propagate his anti-women, anti-Muslim and anti-Mexican policies.

“This world defeated segregation, we defeated Apartheid and we will defeat this nasty policy created to sow division and hatred.

“His invite should be withdrawn until the executive orders are gone and every element of them repealed.

“History judges us by the actions we take in opposing oppression.

“I am proud that during the 1980s and 1990s I stood with Labour party members, trade unionists and faith leaders opposing the racist regime of South Africa.

“I was there on the day Margret Thatcher opened her door to P.W. Botha while Nelson Mandela languished in a prison cell.

“The Labour party stands unequivocally with those demonstrating today and will do so until we are victorious.

“I have written to Theresa May to demand that she withdraws her offer to Donald Trump of a State Visit.”