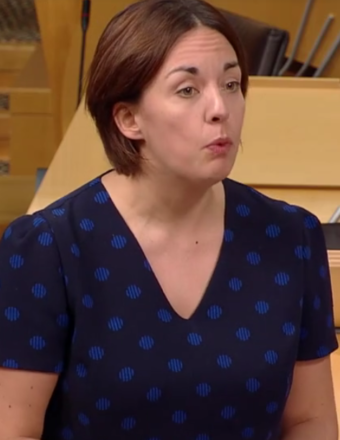 The dictionary definition of a generation is as follows: “The average period, generally considered to be about 30 years in which children grow up, become adults, and have children of their own.”

That’s in line with how most people would define a generation. Not the SNP, though.

Despite telling people in 2014 that the vote was a once-in-a-generation event, Nicola Sturgeon is yet again seeking to impose another referendum on the people of Scotland. Two and a half years ago more than two million people in Scotland voted to remain in the UK. It appears that Nicola Sturgeon wants to disregard that vote because it didn’t go her way.

As we all know from the 2014 referendum, and the Brexit vote, referenda are divisive. They cause arguments in homes, workplaces and communities. The online abuse I received this week alone shows how corrosive this argument is.

While the Nationalists want people to believe that the 2014 vote was a carnival of democracy, the reality is that for many people it was horribly divisive.

Instead of spending the next two years focused on how to close the attainment gap in our classrooms or tackling the shameful health inequalities in Scotland, the Nationalist government in Edinburgh will spend all of its time trying to break our country apart. Laughably, Nicola Sturgeon still claims that education is her top priority.

When this issue comes before the Scottish Parliament next week Scottish Labour will vote against another referendum. But the unfortunate reality is that the combined votes of the SNP and the Greens will be enough to force this through Holyrood.

So if this country does face another referendum, I will work tirelessly to make sure that our side of the argument is successful again. To ensure that we show that our values of solidarity and co-operation can win out and to protect the jobs and opportunities of everyone who lives and works in Scotland.

There is both a case for remaining in the UK and against separation. We shouldn’t be ashamed to proudly make both arguments. The Nationalists will complain that we are being negative. It’s a bit like when Donald Trump shouts about “fake news” every time he is presented with facts that are inconvenient to his case.

Remaining in the UK means we can pool and share the resources of our entire country to invest more in schools and hospitals, giving everybody a fair chance in life. We are better placed to look after our older people through the UK pensions system, to provide security to our nation through shared UK defence, and we can make a bigger difference in the world as part of the UK’s broad network of humanitarian efforts.

Scotland’s trade with the rest of the UK is worth four times as much as our trade with the EU. That secures hundreds of thousands of jobs and provides our young people with almost unlimited opportunities.

Leaving the United Kingdom would mean at least £15bn worth of cuts to our public services. That would be turbo-charged austerity, over and above that already being imposed by the Tories.

The SNP’s case for leaving the UK is even weaker now than it was back in 2014. The oil price, upon which the SNP’s economic argument was based, has collapsed. That means even less money to invest in our schools and hospitals.

What angers me most about Nicola Sturgeon’s attempt to tear Scotland out of the UK is the false hope she gives to so many of my fellow citizens. The Nationalists march into the poorest communities in Scotland and promise that things can be so much better with independence. But the reality is that the extra cuts that would be needed because of separation would hit the poorest hardest.

Nicola Sturgeon claims that Brexit means there must be another referendum, despite the fact that she now refuses to say that a separate Scotland would apply for full EU membership.

The SNP’s argument is essentially that we should respond to leaving our second most important single market with the EU by leaving an older and more important single market with the UK. The party that argued for pooling and sharing resources in the EU referendum will now, without a hint of shame or irony, demand that we do exactly the opposite when it comes to Britain. Intellectual coherence has never been at the heart of any form of nationalism, and the SNP is no exception.

Labour is clear that together we’re stronger. As a country, and as a society, we can achieve so much more together than we ever could alone.

If this referendum goes ahead it will be divisive. But those of us on the left must enter this debate with confidence that we are correct. The arguments are on our side. Like it did in 2014, I am confident that unity will prevail once again.

Kezia Dugdale is the leader of Scottish Labour.