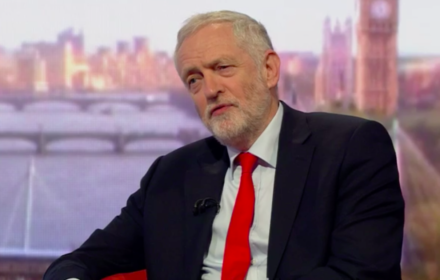 Jeremy Corbyn cast doubt today over his willingness to ever use the Trident nuclear weapon as he pledged Britain would be a different type of country if he was elected prime minister.

The Labour leader said he would not launch a “first strike” nuclear attack and prompted uncertainty over whether renewal of the weapon – currently party policy – would be in the manifesto.

Corbyn was grilled today on the Andrew Marr Show in his first major TV interview since the general election was called.

He said there would be no “first use” of Trident as he set out why any nuclear attack would be a “disaster for the whole word”.

One of the first jobs any new prime minister has to do upon election is to write letters to commanders of Britain’s submarines, giving them their orders on what to do should the country be attacked, or even destroyed, by a nuclear strike. He said the commanders would be given “strict instruction to follow orders when given”.

When asked about what he would write, “What I’ll be saying is that I want us to achieve a nuclear free world, what I want us to do is to adhere to the nuclear non-proliferation treaty and take part in negotiations surrounding that and crucially immediately promote the six party talks on the Korean peninsula as a way of de-escalating nuclear tensions around the world.”

“I want us to achieve a nuclear free world, to adhere to the nuclear non-proliferation treaty, and take part in negotiations around that”, he said.

“The issue has to be that we want a secure and peaceful world. You can achieve that by promoting peace and also promoting security.”

Labour party policy has long been to support renewal of Trident but today Corbyn declined to confirm that would be included in the manifesto, which will be published early next month.

In a punchy interview he also said he was “fed up” with inequality in Britain, and that he would scrap grammars and seek to end all private contracting in the NHS.

“Six million people earn less than the minimum wage. One million people don’t know what their wage is going to be from one week to another,” he added.

He was fed up with a world with “increasing numbers of homeless people” and where young people can’t get on the housing or career ladder because they are saddled with student debt.

Asked whether he could win the June 8 vote, he simply said “watch this space”.

When Marr asked him if would authorise a drone strike on Abu Bakr al-Baghdadi, the leader of ISIS, Corbyn said he would critique the information given to him by the intelligence operatives.

He said: “What I would tell them is give me the information you have got, tell me how accurate that is and tell me what you think can be achieved.”

“My whole point would be does this help to get a political solution in Syria?”

“I think the leader of ISIS not being around would be helpful and I’m no supporter or defender in any whatsoever of ISIS, I’m sure you would concede, but I would also argue that the bombing campaign has killed a large number of civilians, many of whom were virtually prisoners of Isis, you have got to think about these things.”

Corbyn restated his opposition to the airstrikes in Syria, saying: “At the end of the day the only solution in Syria is going to be a political one. There is no other way of getting it. There has to be a reconvening quickly of the Geneva process.”

“I would say to President Trump, listen, it’s in nobody’s interest for this war to continue let’s get the Geneva process going quickly and in the meantime no more strikes, have the UN investigation into the war crime of the use of chemical weapons in Syria and take it on from there.”

“I want us to say listen, let’s get people around the table quickly and a way of achieving that, suspend the strikes possibly, that’s one way.”