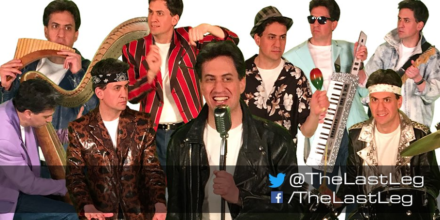 No, that is not an actor. It really is Ed Miliband lip-synching to A-ha’s eighties hit Take On Me for a Channel 4 comedy show.

The former Labour leader and climate change secretary recorded the pop video for the Friday evening show The Last Leg.

He donned jeans and a black leather jacket and, in what must be one of the more bizarre moments of his political career, then appeared simultaneously as the other band members playing a guitar and keyboard.

It is the latest step in what has been described as #Milibanter as the Doncaster North MP has tried to reach out to Britons disengaged from traditional politics.

Over the weekend both fans and critics praised him on Twitter for showing a sense of humour and being a good sport.

He also posed with a bacon sandwich while perched on a motorbike in an attempt to reclaim the infamous image from the last election.

When asked about the 2014 breakfast, Miliband told the host: “It seemed like a good idea at the time… I had a kind of moment when I wasn’t doing much, we were on a visit somewhere, and I thought ‘what a good idea to have a bacon sandwich’.”