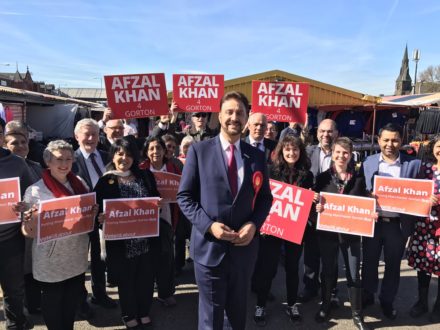 He is of, course, right to be upbeat because he is odds on favourite to be one of Labour’s newest MPs – and indeed anything other than a massive majority would be a shock and frankly a disappointment for Jeremy Corbyn’s Labour.

Sir Gerald Kaufman, the previous MP who died earlier this year, had a majority of over 24,000 at the 2015 general election – and whilst the Lib Dems might talk a good game about pushing Labour in the Remain-backing seat, and the “entirely self serving” George Galloway aims to throw a spanner in the works – Khan is highly likely to end up in Westminster.

Khan is an interesting man, with a classically Labour backstory – born in Pakistan, adopted as a child and coming to Britain, leaving school with few qualifications, then putting himself through education as an adult, eventually becoming a solicitor. He has worked as a bus driver, in a cotton mill and a police officer, and politically began as a councillor, rising to being the first Asian lord mayor of Manchester, then being elected as an MEP in 2014. Now, as Labour’s candidate in Gorton, he has his most high profile position yet – though he has proven he is not afraid of hard graft.

Of course, when he was first selected, we were expecting a by-election on May 4, whereas now the vote will take place alongside the general election.

Khan is genuine in his joy at being elected to Brussels in 2014, when he was part of the raft of MEPs that kicked out the BNP’s Nick Griffin. He also became the first British Muslim in the European parliament.

“I’m saddened that some feel it is legitimate to spread poison around, not understanding the impact it has on society as a whole.”

“We need to be proud of the richness and diversity that we have – it’s something that strengthens us,” Khan said.

He is of course right, and the positive case for multicultural Britain is not something that’s just a good thing to say – it is completely accurate. The gaping hole for positive politics in the country is colossal, and having pride in this Britain – inclusive Britain – could help undermine the hateful message from the far right.

“We’re miles ahead” of some countries in Europe, and “we need to be proud of that”.

Brexit was “a shock” for Khan, “all that I knew, that I understood about where the world is moving to, I felt that there was no way the result of the referendum would be that we would leave.”

“For me, the important point now is, how do we make sure that we make this work for Britain. Ultimately our future is linked to our country.”

Opportunities for the young is an issue that weighs heavily on Khan’s mind, and ensuring that post-Brexit Britain affords as many chances as possible is something he is clearly passionate about.

“How do we make sure we protect the future of our young people [outside of Europe]?”

“[They’re] the ones who’ll have to experience the impact of this decision. How do we make sure that they had those opportunities that they had before?”

“And how do we make sure that many of the good things, which we have benefitted from, we have those protections” in the workplace, health and safety – and “we need to have co-operation of all the agencies [across the EU]. How do we make sure we maintain that?”

These big questions will dog politics for years to come, and making sure Labour has the right response to them will be the marker of whether we can regain ground.

“We’re going to be part of Europe whatever we do. Making sure we protect our economy, that’s the backbone of everything we want to achieve, we’ve got to strengthen that as well.”

“I hope my experience that I’ve obtained as an MEP, I can use for the benefit of the country and the people of Manchester Gorton.”

Following on from Kaufman, the parliamentary legend and father of the House, would be a steep challenge for Khan, and he has given it some thought, describing the “advantage” that he has by seeing Kaufman’s work first-hand and through working with him.

“I think he was an amazing member of parliament, one of the things that has really inspired me which I thought he was really good at, was that he was very much a constituency MP. He was always thinking about his constituents.”

“I will hope to follow that – putting them at the heart of everything I do.”

Galloway’s decision to stand in Gorton has left Khan dismayed, and he does not hold back in his condemnation of the journeyman far-left politician.

“I find it disappointing. I feel it is the reason that many of our members have come here to campaign – to get the message out.”

“His message is not welcome – he’s been disruptive where ever he has gone, he pretends to be Labour and yet he is doing everything he can to undermine Labour.”

“I’m focussed on my own campaign – reaching out to all the people of Gorton, strengthening the relationships which I already have, and getting a better understanding of what the key issues are here.”

“I think the people of Gorton are looking for a doer, not a talker.”

To serve as, hopefully, the first BAME MP for the city of Manchester would be a “privilege and honour” says Khan, but to him it is “secondary” and the important thing is to be a good representative for “all the people of Manchester Gorton”.

“I feel I have all the necessary skills and experience” he says. “It will add something to the richness of the city itself” to have a “reflection at every level” of its make-up. It is something the Labour party is right to strive for, though he warns against complacency.

“I think it’ll be a good, positive story for Manchester.”

Let us hope it is one of many positive stories for the Labour party come the morning of June 9.

This interview was conducted before the general election was called.