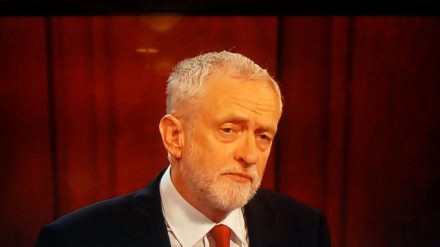 Jezza was on a roll. He swooped into fill Labour’s slot in tonight’s BBC election debate. It was a last minute decision fuelled by the cowardice of Theresa May who called a national vote and then decided she did not like the look of the voters – or their questions.

Corbyn went into this seven-way debate with confidence restored after a turbulent 24 hour period in which he had been judged a qualified success in a televised face-off with Jeremy Paxman, flunked an interview on Woman’s Hour and then sailed through half an hour of joshing and familial reflections on The One Show.

Tonight the Labour leader spotted an opportunity created by May’s absence and reached out to seize it. By most accounts he just about did so, with a series of blows aimed at Tory levels of poverty, dependence on food banks and cuts to support for the working poor.

His panicky rival for Downing Street was nowhere to be seen, presumably relaxing at home in her leather trousers. Corbyn, however, was fired up. He had dropped the “Monsieur Zen” who got him through Monday night’s Sky News/Channel Four debate and reverted to the impassioned crusader against cuts who soared to the top of the Labour Party.

“Have you been to a food bank?”, he challenged Amber Rudd, who was sent along to explain May’s night off.

“Have you seen people sleeping around our stations? Have you seen the levels of poverty that exist because of your government’s conscious decisions on benefits?”

It was not only about austerity, however. Questions over terrorism, national security and the bombing of Libya loomed large. Rudd, promoted to home secretary by her mentor May, targeted Corbyn in this section but her strategy failed to come off.

The cabinet minister faced most criticism from Corbyn, the Greens’ Caroline Lucas and Plaid Cymru’s Leanne Wood but delivered a very Mayist pitch of being tough and boring while having to defend police cuts which were brought in by her boss.

Corbyn was as clear in his condemnation of the “unbelievably abominable” Manchester attack as he was in his praise for the “absolutely magnificent” response of the city’s people in coming together across different faiths and races.

Paul Nuttall, the UKIP leader, shouted over him but in his angry finger-jabbing reaction he merely looked like an angry man at the end of a long night in a boozer.

Corbyn was calm, as he has been through this week’s television tests, and will have surprised those who suspected he would collapse again as he did in the manner of the Woman’s Hour debacle. The steady criticism of Labour’s approach to protecting the nation over the last few days has, however, given a taste of what comes up on the doorstep.

He finished on a strong note when the panel was asked to define the meaning of leadership. His answer – that it meant being prepared to learn, rejecting the “spiv economy” and refusing to “walk by on the other side” – was compelling although it prompted the question about how this humility would go down with a public used to the swagger of David Cameron and the merciless monotone of May.

Rudd rounded her evening off with a good line to viewers that they had “seen the coalition of chaos in action”. It worked well but Corbyn, once again, will be able to sleep easily tonight. The reality of a seven-way debate means it is easier to pick losers – like Nuttall – than winners but the Labour leader spoke with a sincerity that served him well.