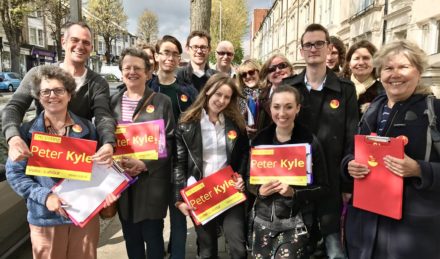 Two years ago, Hove and Portslade defied the odds and elected the only Labour MP between Southampton and Dartford. A little red dot in a sea of blue.

In the two years that followed, Peter Kyle has given his constituents a truly national voice. From securing £20m investment from the government for much-needed upgrades to Southern Rail, to changing the law to protect domestic abuse survivors and leading the fight against the unfair changes to the school funding formula, Peter has shown that having a hardworking Labour MP fighting your corner can make all the difference.

And on Brexit – the defining issue of this general election – Peter has been a strong and independent voice. His “three tests” for Brexit – on work, education and tourism – have hung in the window of his high-street office for months for all to see. He has been clear that he will not support a Brexit that makes the people of Hove and Portslade worse-off.

In a car-crash interview with the Brighton Argus earlier this week, the Tory candidate for Hove, Kristy Adams – who tried to be a candidate in 12 different seats before settling on Hove – was asked three times how she voted in the European Union referendum. She flat-out refused to answer each time. That is simply not good enough. The people of Hove and Portslade deserve a member of parliament that makes their voice heard on the issues of the day – not one that ducks the big questions.

Peter has shown that he is willing and able to stand up to defend his constituents. The evasive non-answers by this Conservative carpetbagger – the self-styled “Theresa May’s woman” who was until recently a Tory councillor in Bedford – show she cannot not be counted on to do the same.

But before we get carried away, there is one fact that means we have to work non-stop to keep Peter Kyle in post: it only takes one extra Tory vote per street for Kristy Adams to win. That’s why we’re in the fight of our lives.

The Tories are throwing everything they have at Hove and Portslade. Their activists are coming from far and wide to unseat Peter and elect a Tory candidate that will rubber stamp a hard Brexit. Peter is determined to hold the government’s feet to the fire over Brexit – and ensure that our vibrant, tolerant city’s voice is not drowned out.

If you can spare a day or two between now and polling day, come down to Hove and Portslade and help us defy the odds again. Let’s stop our little red dot from drowning in a sea of Tory blue and keep Hove Labour.

To get involved in Peter Kyle’s campaign go to peterkyle.co.uk

Lord Bassam is opposition chief whip in the House of Lords and a former leader of Brighton and Hove city council.

View all articles by Steve Bassam