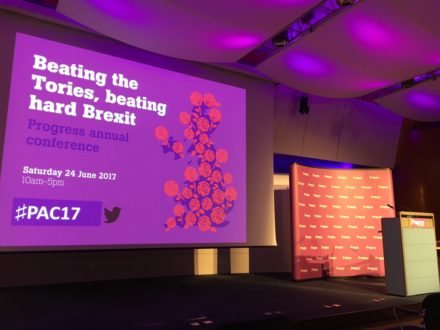 This is the full welcoming address speech given by Progress director Richard Angell at their annual conference.

Welcome to Progress annual conference 2017. It is promises yet again to be the place of ‘straight talking honest politics’ with speakers from across the Labour movement.

We meet in the aftermath of an election that came as a surprise and a result that was somewhat unexpected.

We are not in government, and not where any of us want to be, but better than most of us predicted. I feared losing great colleagues in the parliamentary party – and we did lose some – but to have gained seats for the first time for twenty years is a credit to the Labour family and the Labour leader Jeremy Corbyn. When the two wings of Labour work together we can clip the wings of the Tories.

Jeremy Corbyn on campaign can be rightly proud of the energy he showed, the excited he generated and how he weathered dead cat after dead cat being thrown at him by CCHQ and the Tory press.

Momentum should be proud of how they mobilised people and innovated with new apps and activists tools.

But this result is also yours. Whether you have one hour or gave up work for seven weeks you all had a part to play. You providd we are the backbone of the party. The party staff, our great MP, life long Labour members and those in Progress and Labour First who had miss givings went above and beyond. In face-to-face conversations up and down the land, you were great ambassadors for Labour. I personally went to 30 seats, and my team joined me in most and went to even more without me. It is with great regret that Natascha Engel, Rob Flello, Alan Meale, David Winnick are not now Labour MPs. It with with great pride that Ian Austin, John Woodcock and Gloria De Perio held on – for everyone who help them and their colleagues thank you.

Whenever we lose, we have a responsibility to talk about where we succeeded and where we did not. For those of us who feared the worst we should approach this debate with a degree of openness and generosity. Today – in the first mass Labour gathering since 8 June – is intended to be exactly that.

One of the things I respect is how Jeremy Corbyn has remarked on the mixed picture – yes 35 gains, but also five losses on top of Copeland earlier in the year. Upturns with middle class voters and a retractions with many working class voters.

When previously we were debating if the Labour leadership want to win. Jeremy Corbyn and most of his team emulate that second best is not good enough. Opposition is no replacement for government. The young people in Momentum seem to be of the same view.

This must be focus going forward. This years Labour party conference must be for showcasing Labour’s policies, refining the offer to reach places it did not previously reach, to cut off the sharp edges and to welcome new supporters coming our way. The only root to victory for Labour is through people who voted Tory in 2017.

Instead there are some in the shadow cabinet and upper echelons of Momentum who want Labour conference to be about resolutionary socialism and to change the rules to undermine the deputy leader, to appoint a second deputy, to force through the McDonnell amendment and change the rule on deselecting Labour MPs. This is folley. Not only does it risk the peace that has broken out in the party, it would demonstrate to the public that their concerns come second and party interest comes first. We already have a government doing that. They – the voting public – deserve an opposition that will put them first.

So ‘One more heave’ will not suffice. To deliverer for the ‘many not the few’ we must reflect that there is ‘lots done, lots to be done’ so Labour must look ‘forward, not back’.

Labour has a big task ahead and a huge responsibility.

Crucial to all of these challenges is Progress. Our organisation has an important contribution to make. To renew our ideas – the progressive centre ground was not on rejected in the ballot box two weeks ago because we had long lost the debate in our own party. We must engage in deep thinking and show we have the best answers for Britain’s problems. We have to stop our local parties from being taken over by people who want to take us back. Make common cause we new members who want to see a Labour government. We must train and develops a need generation of talent in our party to be able to do these great tasks. In many ways Progress is more needed than ever.

Yesterday it became known that David Sainsbury, after 21 extremely generous years, will end his support for party political causes, Progress included. We are deeply grateful to everything he has done for us and proud of our association with him but it is time to stand on our own two feet. I hope we can cultivate a network of donors who can help fund Progress for its next chapter. I hope you will invite to your friends to join, in increase your contributions where possible, join the 100 club – or even the newly created Thousand club – if you can so that our important work can continue.

Progress at its core the campaign for a Labour government. We believe – as Emmanuel Macron has shown in France – that the progressive centre group is where the voters are, but more so, where lasting change is made. For that we need a two, three, four term Labour government. We want out values entrenched, the institutions we build to outlast a Tory government that might follow.

Second place will never do, stay focused on that goal, regroup, make friends, build alliances, make common cause with new members, do all you can to stop a hard Brexit and show that the modernisers have plenty more to give.

Enjoy the conference. I give you Ayesha Hazarika.