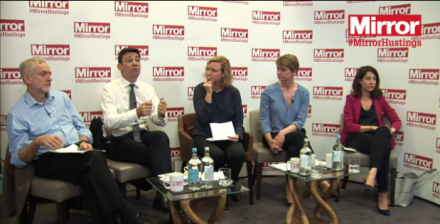 Like many people, I was wrong about Jeremy Corbyn. I voted for him in the first leadership ballot, supported him for the first few months but then felt he didn’t come up with the goods or show the right leadership qualities. I then voted for Owen Smith because I had become completely disillusioned with the Labour leadership owing to its chaotic office, the failure to set out any domestic policies and Jeremy’s poor media performances.

Once he had won that second ballot, however, there was no turning back and, as the parliamentary candidate in the Richmond Park by-election in December last year, I was unfailingly loyal because – put simply – unity is crucial to electoral success. I have remained loyal since, campaigning in several London seats (the wrong ones as it turned out, because they all ended up with 10,000-plus majorities!) to help Labour win.

Jeremy’s victory in the second leadership election meant it was incumbent on everyone in the party to give him the opportunity to show what he could do. Not being one of his inner circle, I don’t know how he did it but he ran a stunning election campaign, as we all now have to recognise. His team sorted itself out, played on his strengths and inspired the electorate. It belied the convention that nothing much changes during the hustings period.

The key point is that none of the other leadership contenders in either leadership ballot would have succeeded in getting 40 per cent of the vote. Labour was on a downward slide, having lost seats in all four elections since 1997. That trend has been reversed and we are now just 2.5 per cent behind (which is made to look far larger by the 56-seat difference).

Corbyn said right from the beginning that he would inspire non-voters and that is precisely what he did. This is what happened in both the US election – where Donald Trump inspired the previous non-voting white working classes to come out for him – and in the Brexit referendum, where turnout was high thanks to normally apathetic voters coming out. Barack Obama, too, inspired new voters, blacks and Latinos who had previously not registered to vote, feeling that politics was somehow nothing to do with them.

This is why the – thankfully few – people now saying that we just missed out on winning the election, and that with another leader we would have done better, are misrepresenting what has happened. Remember that for the past few years, the “death of the Labour Party” has been taken as a given. The prognosis was that we would wither and die from natural causes, losing seats because our working-class base was being eroded.  The Corbyn revolution has changed all that and we must acknowledge this. It is, in fact, the Conservative Party, which, remember, has not won a majority of more than 21 seats since the days of Thatcher, which faces an existential crisis. Their core support is slowly dying off while every day new potential Labour voters are coming of age. You only have to look at the break-down of voters by age to see this.

This, therefore, is a call to all sides in the Labour party to come together. We must not let this opportunity to capitalise on the election result slip through our hands by reverting to party division and dissent. The Corbynistas must not be too triumphalist in victory while the right must be gracious in defeat and, like me and so many others are already doing, admit they got it wrong. Jeremy must reach out to all wings of the party to ensure there is a shadow cabinet of all the talents, but, just as important, his former opponents in the party must respond positively. This is not a time for showboating or concerns about policy differences. Politics is the art of compromise and all politicians know that.

We need the best people to respond to the government on the Today programme and elsewhere in the media. Of course, differences remain but the manifesto, with, for example, its commitment to Trident, was a unifying document. One of the reasons we did so well at the election was the discipline shown by MPs – we did not start arguing in public and we must not start doing so now.

Christian Wolmar is a former Labour parliamentary candidate as well as a transport expert and writer.