From Labour’s perspective, the most appropriate way to describe the 2017 general election is ambivalence. The results are confusing and we are no longer business as usual.

We were not massacred as many had feared; the party was not reduced to a rump of 150 seats. The Conservatives were humiliated, having destroyed their parliamentary majority in the misguided belief that they could sweep Labour aside.

The leadership exceeded expectations and the party has moved closer to power. Under these conditions, we forget that Labour lost to a party that has been running the country for seven years. We still have a way to go. 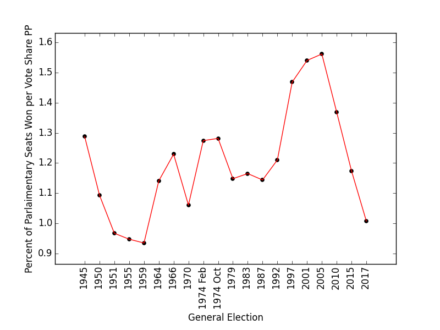 While we did make strong gains in the popular vote, the Conservatives have consistently made these gains since their low in 1997.

This week, Labour Roadmap publishes its analysis of the election results. We have shown that the 2017 election has been the least effective for Labour since the 1950s. Labour’s campaign failed to appeal enough in the marginals. We failed to convert our surge in popular support into seats.

A typical strategy for a party closing in from the opposition has been to implement ‘One More Heave’ — a focus on the closest marginals to take control of the House of Commons. The concentration of votes for Labour indicated by these results and further by the greater swing in our existing seats, does provoke questions on how difficult this task will be.

The landscape for Labour is very similar to the aftermath of the 1959 election — more than 40% of the popular vote and seats in the mid-200s. Achieving a perfect swing to take us over the line with 64 more seats would put the party in a situation similar to that of the 1964 Harold Wilson victory. So it is possible, but back then Jo Grimond had only nine seats.

The question Labour must answer is can it expand its offer to the marginals without the bubble bursting in its already tall support? Labour’s only other option if not, is to look closely at what other coalition of voters could be stitched together for a parliamentary majority. Yet we as a party are not yet ready to understand how this can work, and our leadership has won the right to focus on our current trajectory.

Moving forwards, the battleground we have identified is 128 seats for Labour to fight. Eighteen are currently held by our party, and we must win 82 overall to win the next election. We have shown that this is only going to happen if we make these gains against the Conservatives first and foremost, with a progressive alliance of voters not viable. 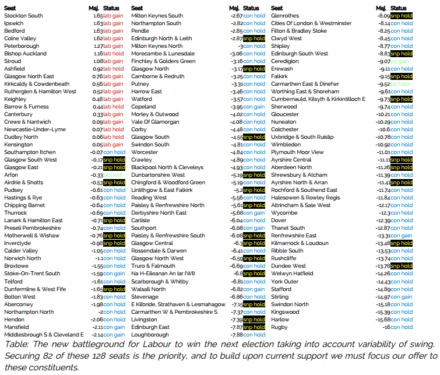 There are a number of SNP seats on this list and we have our work cut out in Scotland. The landscape has changed dramatically for Labour over the past two elections. We are no longer an attractive home for voters, and Scottish political dynamics appear overriding. Remain seats defied the salience of Brexit and swung towards the Conservatives. Scottish Labour must have the tools and be willing to use them to position itself to win.

Labour made progress in this election, but we must be wary of the pitfalls that await the party. We must develop a clear understanding between now and the next election of how to retain our existing voters, and expand this to our target — mostly Conservative — voters.

Labour Roadmap is a group of activists analysing the election result to see how it can be built on. You can follow them here.