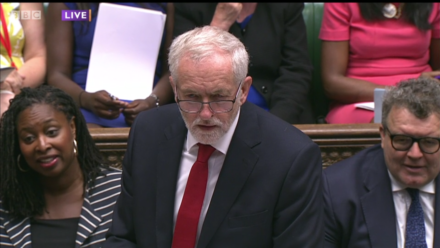 Thank goodness it was one to get excited about. After so many boring prime minister’s questions, Jeremy Corbyn and Theresa May set out on their final tussle before the summer with an energy which had been lacking from so many of their other snooze-a-thon sessions.

The Tories’ miserly public sector pay cap formed the basis of Corbyn’s attack on the PM and what he described as this week’s “slapdown to her squabbling cabinet”. The latest wave of fury at Tory policies was prompted, of course, by the latest Philip Hammond gaffe after rivals leaked his criticism of “overpaid” nurses and teachers.

“Does she think the chancellor was actually talking about her own ministers?” Boom-boom, Hammond couldn’t have set that one up much easier for Corbyn.

The Labour leader’s jokes were a little, well, laboured but his anger, and that of his party, was forceful. The Tories have stumbled from austerity to mutiny over the public sector pay cap but, despite weeks of public hints otherwise, the one per cent ceiling endures.

Corbyn was angry as he channelled the despair of countless school and hospital workers who are struggling to get by in May’s nation.

This was the crusading tone that powered him to two victories in Labour leadership elections rather than the sometimes faltering performance we have seen at PMQs.

When May failed to answer the points put to her, Corbyn shouted “my question was about whether the chancellor said public service workers were overpaid or not”.

As Corbyn laid into the government, Hammond sat there almost impassively, scratching his face and looking strangely untroubled as his reputation was ripped up on the floor of the Commons.

May, as is increasingly the case when she has nothing to say, rolled out her David Cameron tribute act by showering praise on the “number one health system in the world” – so why not pay for it properly? – before diving into the tired claim about how Labour “crashed” the economy.

It was uninspiring stuff from May, who has neither the swagger of Cameron nor the cold fury of George Osborne.

Corbyn also rolled out the tactic many thought had been dropped: the “people’s questions”. This time it was the turn of a voter, Sarah, who spoke up for her care worker sister-in-law who has “sacrificed her health” in order to look after others.

“Only her passion and dedication keeps her going”, he said.

This is a tough area for May, who struggles to think on her feet and doesn’t really do public displays of emotion.

Low pay is a “threat to an already weakening economy”, Corbyn told his opposite number and – bizarrely – May countered with a boast about the Tories’ living wage. We all know, however, that Osborne’s living wage is a con and even Corbyn was moved to defend the last Labour government which introduced the national minimum wage – a law passed, of course, in the face of Tory opposition.

Corbyn easily had the better of the encounter, which was the last before the autumn and could – if the Tory whisperers get their act together – be May’s last turn at the despatch box. Well, we live in hope, but the PM’s £1bn bung to the DUP is likely to buy her enough time to hang on into next year.

Until then, however, she is a wounded leader – or, as Ian Murray said, the “interim prime minister” with a “temporary chancellor”. Spreadsheet Phil didn’t look too bothered but the jibe was another sign of Labour’s progress this year because backbenchers and frontbenchers seemed united in their attack on the Tories.

Of course, the opposition’s ideological split has not been healed, rather smoothed over, but this was a day to celebrate the Tory turmoil, stand up for public sector workers and enjoy the sight of a Labour Party which exposed the conniving cruelty of a weakened government with a witless leader. Roll on September.