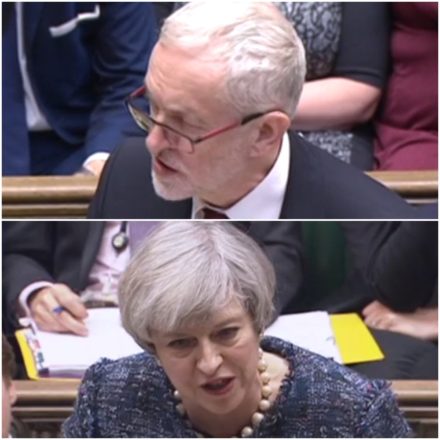 “Does the prime minister really believe falling wages are a sign of a strong economy?”

Once the Tories claimed that they were the party of competence, that you might not like everything that they do but that they’re the safe guiding hand that our nation’s finances need. Today, it is clear that they are far from it, and Jeremy Corbyn was razor sharp as he pointed out every flaw – both moral and in aptitude – in their woeful government.

Corbyn was at the top of his game in today’s prime minister’s questions, whereas Theresa May might has well have been performing Maybot bingo with the number of cliches she trotted out. She warned about racking up debt (the Tories and coalition have added £813bn to the nation’s debt since 2010), that you can’t just hand out money (unless its a £1bn bung to the DUP of course) and did her best Thatcher impression by warning that government has no money of its own. Seems a bit irrelevant, and doesn’t really explain away why it is that they can’t seem to make people’s lives better.

The Labour leader was even able to point that the Cameroonian dauphin George Osborne, long the thorn in May’s side, has even now publicly stated that he believes Gordon Brown’s government did the right things in the aftermath of the financial crash. On the economy, it is clear that the ground has shifted – and credibility is firmly on Labour’s side.

It is a sign of Corbyn’s growing confidence in PMQs that he felt able to start the session noting the fall in unemployment, which on the face of it might seem like a Tory success. However, dig a little under that headline figure, and note that for many those real term falls in wages shows that work under a Conservative government doesn’t really pay. It’s all well and good having a job, but if you’re so stretched by bills and rising living costs such that you have to use a foodbank, then it’s hardly something to shout about, is it?

Earlier in the day, Labour had claimed a significant win, with the government forced into a climbdown over the much maligned Universal Credit scheme’s premium rate phone line. It had been the case that recipients had to phone a number that could charge them as much as 55p a minute, but this morning the Tories announced that it would switch to freephone within the month.

Corbyn questioned the interim PM about this, and it is a sure sign of how shaky she feels in her job that she first seemed to answer “yes” when he asked “The fundamental problems of Universal Credit remain – the six-week wait, rising indebtedness, rent arrears and evictions – will the PM now pause Universal Credit and fix the problems before pressing ahead with the rollout?”

The Labour leader could almost claim the second major victory of the day – but alas the PM hadn’t seen sense, but simply misspoken. As the Labour benches were jubilant, you could see the Tories squirm – and if the Wednesday set piece is good for one thing, it gives us all an idea of the mood of the House.

There was only one party leaving the chamber happy – and it wasn’t the Tories. Labour are firmly on the front foot at the moment – and long may it continue.