Corbyn said May was using the reshuffle to “dodge the real issues”, arguing “people are dying because of this Government’s decisions”.

The reshuffle began yesterday morning and was remarked on for it’s failure to make any significant changes. It was thrown into disarray when Justine Green, then Education Minister, quit government after refusing a job as work and pensions secretary. Other changes saw controversial health minister Jeremy Hunt decline moving to become business secretary, instead persuading May to let him keep his health brief and add social care to his responsibilities.

The reshuffle was intended to be a show of strength follows the Conservative’s poor result in the 2017 general election, where they lost their majority.

The Labour leader said the shuffle showed the Conservatives plans for the New Year is “to dodge the real issues”, noting the “impact of Tory austerity is hitting home with the public, most tragically with the most serious NHS winter crisis yet”

In response to the reshuffle, Corbyn lambasted May:

“It’s simply not good enough. You can’t make up for nearly eight years of failure by changing the name of a department.

“Back in the real world, outside Westminster, our health service is on its knees: with patients dying as they wait for ambulances to arrive, ambulances stacking up outside hospitals, and corridors full with trolleys and patients.” 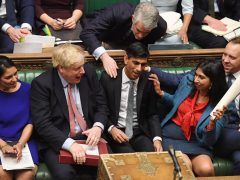