Over three quarters of Labour Party members want a second referendum on any Brexit deal and nearly nine out of ten want to remain in the single market, new research shows today.

The survey of over 4,000 people by Queen Mary University and YouGov, one of the most comprehensive polls to date of views within the Labour party on Brexit, found that:

The research, conducted last June, also looked at the views of members of the Conservatives, Liberal Democrats and the SNP.

Whilst Labour members shared broadly similar views on Brexit to members of the SNP and Liberal Democrats, opinions in the Tory grass roots differed greatly.

Only 25 per cent of Conservative Party members believed Britain should stay in the single market after Brexit; 27 per cent thought Britain should remain in the customs union; and only 14 per cent wanted a second referendum on the Brexit deal.

Tim Bale, a professor at Queen Mary who ran the project, said: “The Tory grassroots are something of a breed apart from their Labour, Lib Dem and SNP counterparts.”

Full results of the survey on party members’ attitudes to Brexit: 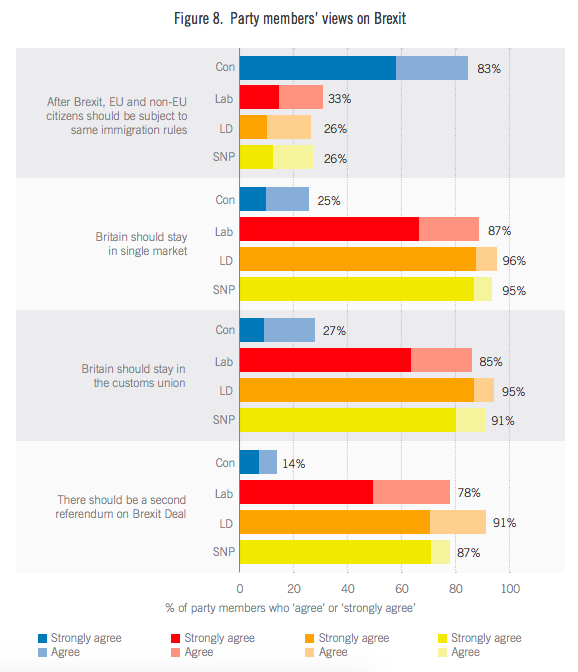 The polling also looked at attitudes of party members to other issues. The full report can be read here.

View all articles by Oscar Webb