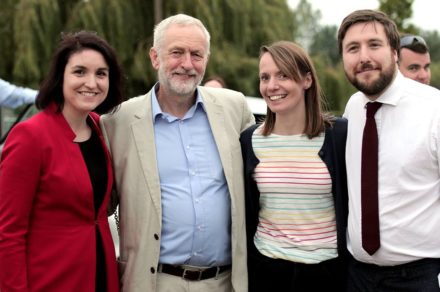 Selection contests in the target seats of Milton Keynes South, North East Derbyshire and Sherwood concluded over the weekend, making further progress on Labour’s aim to choose parliamentary candidates as quickly as possible ahead of the next election.

Hannah O’Neill will be Labour’s PPC in Milton Keynes South again after winning the selection race against Emily Darlington.

The Momentum-backed deputy leader of the local council turned the seat into a key target when she slashed the Tory majority from 9,000 votes to under 1,700 at the last election.

O’Neill received congratulations on Twitter from Jon Lansman himself.

Delighted that Hannah O’Neill has been selected as @UKLabour candidate for Milton Keynes South. She will be a great MP

North East Derbyshire had been represented by Labour since 1935 until it was lost to the Tories in June. Peace will be standing against Lee Rowley, who has a slim majority of 2,861.

Congrats to the next @UKLabour MP for North East Derbyshire @cpeace313 💪💪💪 pic.twitter.com/r6AqbUfDTh

Sherwood CLP has chosen Jerry Hague over Mike Pringle, who fought the seat in June and was locally seen as a unity candidate. Hague was nominated by GMB, CWU and Usdaw to stand against Tory incumbent Mark Spencer, who has been in post since 2010 after gaining the seat from Labour.

Proud and delighted to be selected by the Sherwood CLP members today as the PPC for Sherwood. I am ready to start work now to bring the change Sherwood needs to elect a Labour MP and help return a Labour Government. @EastMidsLabour #forthemanynotthefew