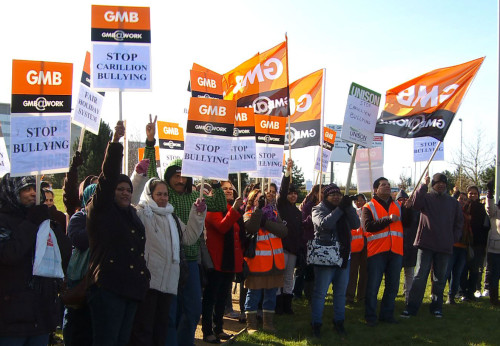 Over the Easter weekend, the GMB celebrated its birthday. On a bright Sunday morning 129 years ago, workers led by Will Thorne came together to form the forerunner of the GMB, the National Union of Gasworkers and General Labourers. The union made an instant impact, successfully leading negotiations to cut the working day among gas workers from twelve hours to eight. Thorne, a true titan of the labour movement, went on to become a leading campaigner for workers’ rights, serving with distinction as the union’s first general secretary and later as a Labour MP.

Our movement and our party came into being at the end of the 19th century in response to economic changes that fuelled a toxic mixture of growing wealth and spiralling inequality. Industrialisation drove an explosion in prosperity. National wealth doubled in the 30 years between 1830 and 1860. For those at the top and the expanding middle classes, this heralded a new age of plenty and the birth of modern consumer society. But for many who drove this growth, the people upon whose backs this prosperity was built, daily life in Victorian Britain was all too often a Dickensian grind of poverty and exploitation. Behind the façade of imperial grandeur, the reality people working in the new urbanised factory economy was one of 12 hour working days, rapacious employment practices, a complete absence of any rights and child labour. Thorne himself was sent to work aged just six.

It was against this backdrop that the pioneers of the labour movement began to organise the fight back. The changes they brought about are so deeply embedded in our daily lives that it is easy to overlook how hard they had to fight-and how successful they were. Within a matter of years, trade unionists won a reduction of the working day to eight hours, weekends off and key rights for workers, including sick pay. Soon after, the party the movement had founded – the Labour Party – went on to introduce sweeping reforms, including the establishment of a cradle-to-grave welfare state.

Our country has transformed beyond recognition since the GMB was established in 1889. But today, the need for an active trade union movement is greater than ever. Just as during the Victorian era, we are going through a period of profound economic change where new forms of production, often based on exploitative labour practices and imbalances of power, are feeding a widening gulf between rich and poor.

A report published this week by the OECD, a think tank focused on the economies of industrialised countries, argues that fewer jobs than previously predicted will be lost to automation. This has been greeted with relief by some, but it will come as little comfort to those working in the low wage economy.

The reality is that low wage work is becoming increasingly prevalent and precarious. Some of this is not new. Over the last 40 years, as our manufacturing base has shrunk and the services sector has become the engine of our economy, decent unionised jobs have increasingly been replaced by lower-paid roles. The stripping away of employment rights and the attack on unions enshrined in legislation has accelerated this process.

Moreover, technological change and the decline of the manufacturing has also contributed to the hollowing out of the job market and the disappearance of paths into higher paid work. In the service economy, it is much harder to work your way up, especially if you don’t have a degree. The OECD estimates that the number of middle-skilled jobs-those that provide stepping stones to higher paid employment-have declined by 10 per cent over the last 20 years, even as the economy has grown. If you start in a lower paid job, you’re likely to stay in one, no matter how hard you work. Against this backdrop, it’s no wonder social mobility has fallen.

But new forms of work and employment practices emerging are adding to this problem. Our economy is changing, with new forms of internet enabled businesses how we shop, how we eat and how we socialise and how we travel. What many of these new models have in common is that they are built on an unravelling of many of the employment protections that were painstakingly built up over the last century.

What’s more, for many of these new companies – Amazon, Uber, Deliveroo – new models of exploitative employment aren’t just a by-product of their business model. They’re central to it. They rely on just-in-time models of employment, where people are treated like any other resource and employed only when needed, to keep their costs down. In this model, workers have no guaranteed hours and risk, sick pay and pension obligations are pushed through forced self-employment back onto the individual and ultimately the state. Corporate profits rise subsidised in effect by low income workers and the taxpayer.

The impact is stark. While company values have risen to among the highest levels in history, workers have seen the biggest real term stagnation in earnings since the 1820s. Just as in 1889, so in 2018 we are going through economic change that is leaving too many behind. And just as in 1889, unions form a critical part of the solution.

The fight the GMB under Tim Roache has led, to ensure Uber drivers are recognised as workers with all the rights that brings, is a case in point. So is the McStrike, where BFAWU has helped organise casualised workers at McDonalds. Organising in these new businesses and promoting membership among a new generation of worker and workers who might not have thought about joining a union beforehand-like those on zero hours contracts or those who are theoretically self-employed-must form a key part of any strategy to tame the excesses of these new economic models.

But unions’ roles should go beyond organising workers in the new economy. Unions have a crucial role to play in helping workers gain the skills to progress in an atomised labour market. In the US, unions like the SEIU have used their bargaining power across companies not only to fight to their members’ rights but also to upskill lower wage jobs, rebuild career ladders and ensure members get the training they need to progress to better paid jobs.

Labour’s manifesto was the most pro-union in a generation. But now is the time to go further, to reflect the essential role unions can play in redressing the impact of economic change. In particular, Labour should consider how unions’ roles can be extended into the field of skills and training to help upskill jobs in key parts of the service economy to pay more and to build career ladders across employers that can offer low waged workers a route out of poverty pay.

Today our economy is going through changes that rival those seen at the end of the Victorian era in their scope and impact. And just as in the Victorian era, unions have a pivotal role to play, in partnership with a Labour government, in making sure that these changes play out to the benefit of working people. Will Thorne would be proud.

David Pinto-Duschinsky is a GMB member and was an adviser to the Chancellor during the last Labour government.

View all articles by David Pinto-Duschinsky