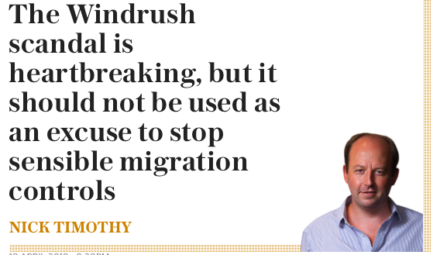 In his latest column for the Telegraph, the man often held chiefly responsible for the Tories’ disastrous 2017 manifesto argues that the Windrush scandal should not lead to a change of direction in wider immigration policy.

Timothy served as Theresa May’s joint chief of staff until his resignation in the wake of last year’s general election.

The political adviser says Tory ministers are right to make it more difficult for illegal immigrants to rent, gain employment and benefits. He does admit, however, that “things must not go too far”.

Timothy goes on to reveal that although Theresa May has been criticised for the notorious “go home” immigration vans sent to six London boroughs in 2013,  the plan was in fact approved “while she was on holiday”.

In my column today I also reveal the truth about the notorious “go home or face arrest vans”: TM was opposed to them and they were approved while she was on holiday in 2013. pic.twitter.com/E9RYGldCcB

The tweet posted by Nick Timothy, promoting his column and highlighting his ‘scoop’, offers a fantastic example of Twitter’s unofficial law, The Ratio, with 750 replies and 71 retweets.

Here is LabourList‘s pick of the best responses:

all of my personal and professional failings? Nothing to do with me mate i was in magaluf with the girls https://t.co/04zgpzZ92z

Whitehall literally takes *years* to sign off ad campaigns (Those Who Can, Teach for instance took c18 months). Yet somehow the Home Office hired a van, a poster company all while May was hiking somewhere. Impressive.

19 questions for Nick Timothy about his defence of his former boss, Theresa May. My latest https://t.co/8L2hrEITQr pic.twitter.com/3DLWdy2suw

Defending Theresa May by arguing that she’d lost control of her own department when she was Home Secretary is a surprising tactic. https://t.co/K49OrJIsSg

Waiting for Nick Timothy to claim Theresa May wasn’t responsible for the decision to call the snap general election because it was made while she was on holiday in Wales.

Nick how can something happen when the Home Secretary is opposed to the specific thing that the Home Office is doing? Where is the evidence of this? If TM was opposed to go home vans when she was Home Secretary how and why did they happen? She was in charge of the department! https://t.co/hQFc8UKwA1

The Go Home van had a number to text – and the Home Office received 1,561 messages.
Unfortunately, 1,034 were hoaxes which took 17 hours of staff time to deal with.

Following Nick Timothy’s column about Theresa May and the “go home” vans, I just want to make it clear that all the bad articles I’ve ever written, I was opposed to them, and they happened when I was on holiday anyway.