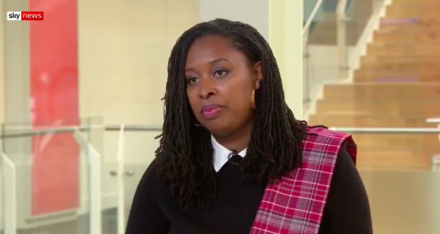 Today Dawn Butler said Theresa May can be personally accused of racism and held the Prime Minister responsible for “racist legislation”.

Speaking to Niall Paterson on Sky about the Windrush crisis, the Shadow Women and Equalities Secretary described the Tory government as “institutionally racist”,

Asked whether the Prime Minister could be personally accused of racism, Butler replied: “Yes.

“She is the leader that’s presiding over legislation that’s discriminating against a whole group of people who came from the Commonwealth, who suffered racism when they came over, the ‘no blacks, no Irish, no dogs’.

“And now they’re having to relive that trauma all over again because of Theresa May. She’s not going to get let off the hook on this. And this has to be redressed as quickly as possible.

The Brent Central MP added: “In my own personal opinion, and I’m speaking as myself as Dawn Butler, the daughter of Jamaican parents, I’m saying that Theresa May has presided over racist legislation that has discriminated against a whole generation of people from the Commonwealth.

“Her policies that she has implemented have disproportionately affected people from the Commonwealth and people of colour and therefore if you look at what institutional racism is, that’s what her policies are currently delivering.

Dawn Butler says Theresa May could be accused of racism pic.twitter.com/AxMOzUE1HS