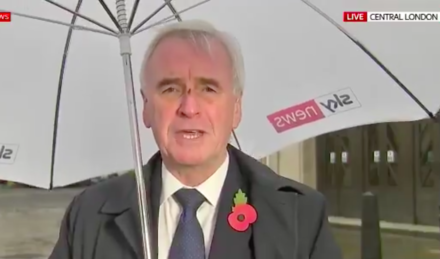 Ahead of the Autumn Budget on Monday, John McDonnell has warned the Chancellor that if the government doesn’t halt the roll-out of Universal Credit, Labour will encourage other parties to vote down the budget.

Appearing on Sky’s Sophy Ridge on Sunday, the Shadow Chancellor said: “What we’re saying – and it’s not just me, it’s the National Audit Office, it’s large numbers of charitable organisations and others basically saying halt the roll-out of Universal Credit to stop these people being forced into poverty, halt the roll-out.

“And I’m saying to other political parties, if he doesn’t halt the roll-out of Universal Credit, we’ve got to vote this budget down. We’ve got to stop him forcing people into poverty in this way.

On Brexit, McDonnell told Sky News he was “really shocked” by the answers Philip Hammond had offered in an earlier interview, where he revealed a no-deal Brexit would mean a new budget.

“He’s gone back to what he said some time ago, which is basically he seems to have accepted a no-deal Brexit. He does want us to be like Singapore, a sort of tax haven, which will undermine our manufacturing base and I think put people’s living standards at risk. I was really shocked by the interview, really shocked.”

Labour has issued ten emergency demands for the Budget that would tackle the key failings of the flagship Tory benefit policy Universal Credit:

“I was really shocked by the interview” – @johnmcdonnellMP was not impressed by @PhilipHammondUK on Brexit and universal credit in his interview with @RidgeOnSunday #Ridge pic.twitter.com/RGH08beLZR