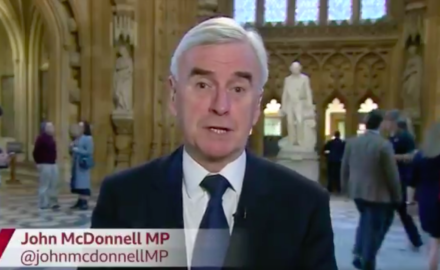 John McDonnell has confirmed that Labour is keeping the option of another Brexit referendum “on the table” if a general election is not possible.

His statement aligns with Labour Party policy, and reiterates the views of Labour’s Brexit spokesperson Keir Starmer, but comes after Jeremy Corbyn has on a number of occasions expressed dislike for the idea.

McDonnell told the BBC: “What we need now is a deal that will protect jobs and the economy […] The government should move over and let the opposition seek to form a government. Failing that, general election. If we can’t get a general election, yeah we’ll keep a people’s vote on the table.”

Asked whether Labour is backing the deal, McDonnell replied: “Oh no, we can’t do… I can’t see it commanding a majority in the House, it just won’t fly.”

John McDonnell: “If we can’t get a general election, yes we will keep a People’s Vote on the table” #politicslive #Brexithttps://t.co/MkPy0EVEHK pic.twitter.com/9gfsb3uziQ