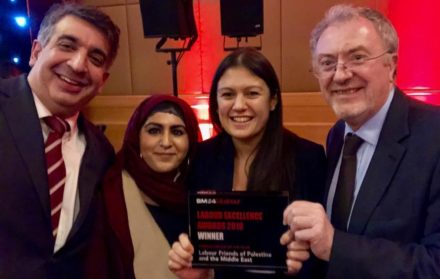 I visited Palestine as a new MP and I was struck by the threats facing the next generation, the ferocity of the attacks they endure and the systematic denial of their rights. I met a three-year-old child whose house was surrounded by the Separation Wall and was growing up without daylight. I saw a 15-year-old shackled by the ankles, who had been held in administrative detention for months without any contact with his family, access to school or a lawyer. I saw families humiliated at checkpoints on a daily basis and the denial of basic medical care as a result.

Before I was elected to parliament, I worked with refugee children here in Britain. I fought for children in immigration detention and for others made forcibly destitute by their own government. Those children were frequently denied legal advice and we repeatedly had to fight off attempts to subject them to harmful and inaccurate X-ray examinations just to prove their age. After a decade working with some of the most marginalised children in the UK, I didn’t think I could be shocked anymore, but what I saw in the West Bank amounted to the deliberate destruction of the hopes of a generation.

Since that visit, the situation on the ground has worsened. Those young people look for hope but increasingly find there is none. “There is another kind of violence,” Bobby Kennedy said, “slower but just as deadly destructive as the shot or the bomb in the night. This is the violence of institutions; indifference and inaction and slow decay… This is a slow destruction of a child by hunger, and schools without books and homes without heat in the winter.”

Nothing characterises that violent indifference better than the reckless actions of the Trump administration, recently slashing funding to the UN agency that supports the children of Gaza, and the failure of the wider international community to ensure that international law and human rights are upheld. The Tory government’s reluctance to stand up for international law and the rights of those children makes the role of the Labour Party even more important.

For a decade, Labour Friends of Palestine and the Middle East has played a crucial role in the Labour Party. We ensure there is effective scrutiny of the situation in Gaza and the West Bank. We make the progressive case for a peaceful two-state solution in Palestine and Israel. We support initiatives of Israeli and Palestinian citizens to achieve peace and reconciliation. And for years we have worked to ensure that Labour’s policy is robust in defending international law and human rights. For as long as the blockade of Gaza and the illegal occupation continues, while Britain continues to sell arms to Israel, as Palestinian refugees continue to be denied their rights and while the lives of children remain under threat, we will strive harder.

LFPME has faced many of our own challenges over the years. We are a voluntary organisation without any paid staff and we rely entirely on our volunteers’ goodwill and small donations to do our work. I’m pleased to take on the role of LFPME chair now, when more than half of Labour MPs have signed up to support us and the strength of our solidarity is more important to the Palestinian people than ever. Our outgoing chair Grahame Morris has done so much to build the organisation and led the campaign that resulted in Labour recognising the state of Palestine under Ed Miliband’s leadership. But now is the time to do more. A 10-year-old child in Gaza has already lived through three wars. We must end this cycle of despair. We cannot afford to fail.

Lisa Nandy is MP for Wigan and chair of Labour Friends of Palestine and the Middle East.

Lisa Nandy is Shadow Secretary of State for Levelling Up, Housing, Communities and Local Government and the Labour MP for Wigan.