Long before I had ever dreamed of being a councillor or a London Assembly candidate, I was a teacher, an activist and a proud member of our community. I experienced the realities faced by most people: struggling to make ends meet, living in insecure housing, and witnessing violent crime while ever growing inequality beset our city.

When my family and I came to London as refugees from Somalia we were forced to confront injustice, poverty and inequality. But it was our Labour councillors and a Labour mayor who helped us navigate the system, supporting us to find housing and school places. Through social housing, education and an education maintenance allowance we were able to thrive.

It was these experiences that inspired me to get involved in my community, in politics and now, to want to represent Barnet and Camden to improve the lives of Londoners. Tory austerity has made London one of the most unequal cities in the world. As a teacher in Barnet, I saw colleagues breaking down in tears, overworked and exhausted. As a local councillor, I helped families find emergency accommodation and fought against regeneration projects that do not take into account community concerns.

As a proud socialist, trade unionist, Labour activist, local community organiser and councillor, I have worked to bring our diverse communities together. This enables me to build relationships with under-represented groups, strengthen bonds with local organisations and build broad coalitions that can fight back against the Tories’ cruel austerity agenda.

Like all of us, I am heartbroken about the general election. I know how hard members campaigned and fought for a Labour government and despite strong support in London we failed to deliver in other parts of the country. We must make sure that London remains Labour, securing Sadiq Khan’s re-election and returning another Labour-controlled City Hall because Londoners need us to build more social homes, tackle air pollution and urgently address the climate catastrophe, to take a community-led public health approach to knife crime and protect our communities against a Tory Brexit.

At a time of rising antisemitism, Islamophobia and homophobia, we need City Hall to lead the way in combating hate and division in London and ensuring our city is safe and welcoming for people of all backgrounds and identities. But we cannot truly combat prejudice in our society until we root it out of our party and ensure Jewish comrades feel respected and valued. Members who harbour antisemitic views must be swiftly removed. As a black Muslim woman, I know all too well what it’s like to be on the receiving end of bigotry. It has no place in the Labour Party and it goes against our principles of solidarity and equality, and everything we stand for.

I owe where I am today to Labour’s principles and policies, whether in national government, in City Hall or in the council. My family and I would not be in the position we are today without them. I experienced first-hand the difference local Labour representatives can make to people’s lives and I want to be part of that same support network that enabled my family to transform our lives.

This is why I am standing to be Labour’s candidate for Barnet and Camden in the London Assembly elections, because I want all Londoners to be able to thrive and to be empowered to improve their lives and their communities. I would be honoured if you would support me. 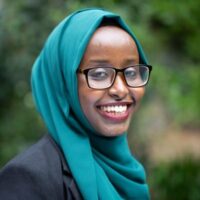 Faduma Hassan is a Labour councillor in the London borough of Brent.

View all articles by Faduma Hassan