As the Labour candidate for the strong Tory seat of Bosworth at the last election, I witnessed first-hand the scale of our historic defeat. As our Conservative Party majority increased from 18,000 to 26,000, it broke my heart to hear so many working class voters tell me on the doorstep that they could not bring themselves to vote Labour this time.

Constituencies like Bosworth are not considered a priority for Labour, but that doesn’t make the selection of a credible candidate any less of a priority for Labour members in those areas. Candidates have a role to play that goes much further than just being a Labour name on the ballot paper, or being on standby in the event of a Labour landslide. They have a duty to be a voice in their local community, to stand up against injustices and to hold their Tory MP to account.

Whilst in opposition, Labour councillors are our last line of defence against devastating Tory cuts. If a parliamentary candidate has been selected well in advance of a general election they will have ample time to build up a relationship with voters, community groups and local stakeholders which can continue on through to local elections. Ruth George’s recent victory in Whaley Bridge shows us how voters value the contribution that Labour make to their local communities – even after our defeat in a general election.

When unveiled as the candidate only six weeks before polling day, I made a promise to members that I would do what I could to address the undemocratic national executive committee (NEC) impositions across the country. I decided that the best way to achieve that was to stand to be a member of the NEC.

Whilst I consider myself to be on the left of the party, I question the achievements of the left slate over the past few years. Open selection has been a priority for factions on the left in recent times but has yet to be implemented, probably because of the unpopular truth that the practically of organising 650 selection meetings across the country ahead of a general election is questionable.

I aim to introduce a more robust candidate selection process that is both pragmatic and democratic. We should empower constituency Labour Parties (CLPs) by allowing them to make the decision on whether they hold an open selection, rather than enforcing open selection on CLPs that are content with their incumbent and would rather use their time to campaign alongside them.

As a member of the NEC I would bring a good mix of knowledge and experience to the table through different forms of organisation and decision making. I am an experienced grassroots campaigner, I have stood for parliament, attended conference as a delegate and have served two terms as CLP chair. Whilst in my work life, running my own web consultancy business means I’m well placed to make recommendations on how to best utilise technology within in our party.

There is more we can do to democratise our party outside of candidate selection. Many are excluded from our democracy by not being able to attend CLP meetings on a fixed date; this disproportionately affects disabled members and those with parental responsibilities. Introducing new technology to enable proxy and online voting at CLP level would open up democracy to our wider membership.

Using single transferable vote for all internal elections would ensure that NEC elections are more focused on the credentials of the candidates rather than factionalism and division. Our NEC could be more accountable to party members. There are currently nine CLP reps from different parts of the country on the party’s ruling body, and the truth is that most members don’t know who their CLP reps are. It’s time to introduce regional representation that will bring members closer to their representatives and make it easier for CLP reps to attend party meetings in their area.

We are in the midst of a leadership contest and when this draws to an end I will be fully committed to supporting whichever candidate is democratically elected by our membership, because we will only win the next election by being united and working together. Please use one of your two votes to vote for an independent mind that will encourage unity and make rational decisions in the best interests of our entire membership, rather than being led by any single faction or pressure group. 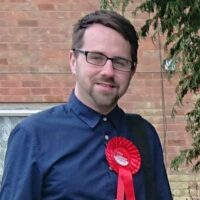 Rick Middleton is a Labour member, chair of the Bosworth constituency Labour Party and the parliamentary candidate for Bosworth in the 2019 general election.

View all articles by Rick Middleton